A fire that started around midnight Sunday at a fashion wholesale market in central Seoul continued to burn Sunday afternoon, with two people injured.

Fire authorities have been fighting the blaze for more than 14 hours as of 3:30 p.m. Sunday at a six-story building located in Jeil Pyunghwa Clothing Market in Sindang-dong. 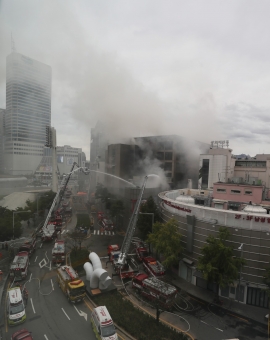 Firefighters attempt to subdue a fire at Jeil Pyunghwa Clothing Market in Sindang-dong, Seoul, at around 11 a.m. Sunday (Yonhap)

While the fire was mostly contained, the surrounding area was thick with black fumes still rising from the building on Sunday afternoon.

Two women who were inside the building when the fire started were hospitalized due to smoke inhalation, and two men escaped the scene without injuries.

According to the authorities, the major fire was initially put out around 1:40 a.m., but the smoke continued to rise from burning piles of clothes inside the stores. Some 290 firefighters were still on the scene extinguishing the blaze.

Authorities believe the fire started at a women’s retail store on the third floor of the building.