The National Museum of Modern and Contemporary Art has rolled out restoration schemes for Paik’s large media installation “The More The Better,” but the sustainability of measures remain questioned

The National Museum of Modern and Contemporary Art in Korea on Wednesday announced that it will try to keep the prototype of “The More The Better” as long as it could. 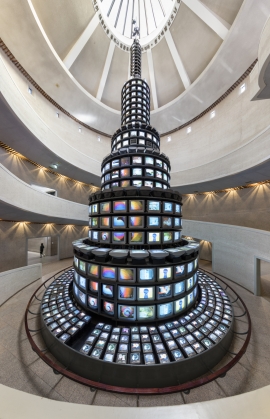 The museum will keep most of the outdated CRT monitors, while seeking other options that will ensure both safety and function. It will replace monitors that cannot be fixed to new-generation monitors, it explained.

“The museum’s most fundamental approach to an artwork’s restoration is keeping its prototype,” the MMCA’s curator Park Mi-hwa said during a press conference held on Wednesday at the museum’s main branch in Samcheong-dong area, Seoul.

“Each artwork reflects its time in one way or another, and that also applies to the case of ‘The More the Better.’ The CRT monitors will function as a representative medium to remember the 20th century,” Park added.

“The More The Better,” or “Dadaikseon,” is late Paik’s 1988 large-sized installation shown in the center of the spiral ramp under a glass-domed ceiling at the MMCA’s Gwacheon venue. The 18.5-meter-tall and 16-ton media tower consisting of 1,003 TV monitors is the biggest work of the media art pioneer. 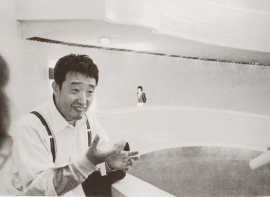 Paik Nam-june speaks about his installation plan for “The More the Better” at the National Museum of Modern and Contemporary Art’s Gwacheon branch in 1987. (MMCA)

The installation, which was not originally designed as a permanent installation, however, has been suffering from minor mechanical failures due to the short life span of the CRT monitors, in addition to recent safety concerns.

Starting in 2003, the MMCA had dusted off, fixed and replaced hundreds of vintage monitors.

In February, 2018, the museum finally had to unplug the whole installation after the Korea Electrical Safety Corporation warned of a fire risk after a safety check.

The museum added it also consulted with major foreign museums that already have experience in restoring Paik’s works. The museums include the ZKM Center for Art and Media Karlsruhe, Museum of Modern Art in New York, Whitney Museum of American Art and others.

Of the 40 institutes, 23 have recommended to have the outdated CRT monitors replaced to monitors that adopt recent technology, and 12 figured suggested that the museum should try to keep the prototype.

Regardless of the majority opinion, the MMCA, however, decided to keep the CRT monitors after looking into the successful restoration cases at the ZKM and Whitney Museum.

“The museum will try to postpone replacing all the monitors for as long as it can. In the meantime, it will try to find ways to change the structure of the installation to make future repairs easier,” curator Park said.

Yet, the museum also admitted that it will ultimately have to replace the monitors one day, as they will be unable to secure parts required to fix outdated monitors.

The MMCA currently has no reliable source that can continue to provide monitors or parts the museum needs. There is no domestic production line still producing CRT monitors in Korea. The museum has found some foreign CRT monitor production lines in Taiwan, France and the US, but it is uncertain if they can provide the exact sizes of monitors required for the restoration.

The only feasible measure no is to secure parts by collecting CRT monitors that are not in use, the museum’s officials admitted.

The first round of repairs since the shutdown -- looking at fixing some 300 monitors -- will start in 2020 to go through 2022. It is estimated to cost about 3 billion won.

The museum expects the repairs to add 10-15 years of life span to the installation, which will also give time to come up with an alternative option for future repairs -- hopefully an option that is more sustainable and feasible.

Meanwhile, the MMCA has also contacted late Paik’s family members to discuss the future of “The More The Better” but did not receive any response from them, it added.

The MMCA is working on listing the hardware of “The More The Better” in its collection by the end of this year. Currently, only the software is listed in the museum’s collection.