[ The Korea Herald – Send E-mail ]
[Newsmaker] NK’s test-firing of new rocket launcher likely failed
While Pyongyang claims conducting two rounds, pictures suggest possibilities for third round of tests
By Jo He-rim
Published : Sep 11, 2019 - 16:43
Updated : Sep 11, 2019 - 16:49
North Korea said Wednesday it test-fired its “super-large multiple rocket launcher” the previous day, however there is speculation in Seoul that one of the projectiles failed to reach its target in the sea.

The North’s state-run Korean Central News Agency said leader Kim Jong-un guided the weapons test. It is the second test of the super-large multiple rocket launcher after Aug. 24, and the 10th launch of projectiles conducted by the regime this year. 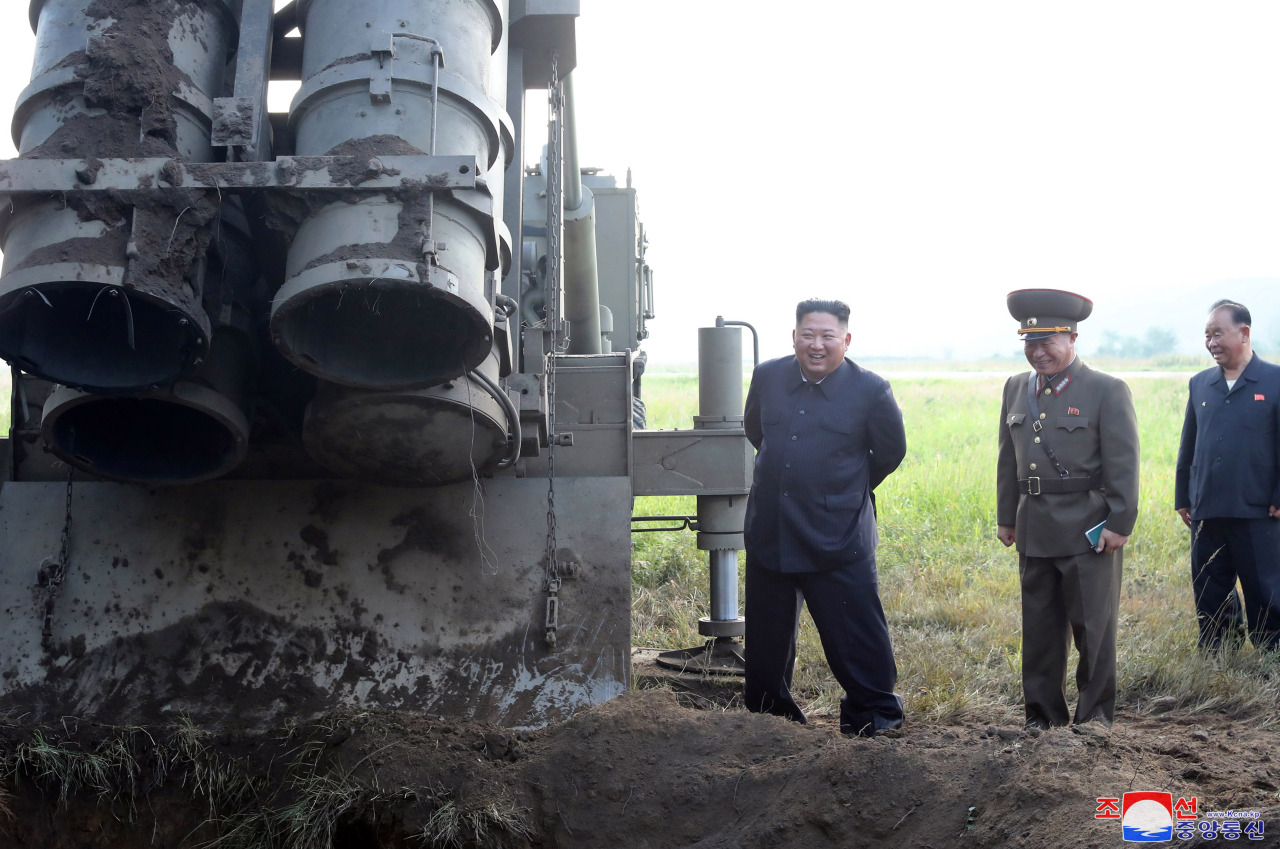 North Korean leader Kim Jong-un checks the "super-large multiple rocket launcher" after it was test-fired on Tuesday, in this picture released by Korean Central News Agency on Wednesday. (Yonhap)
“The Supreme Leader learned in detail about the indexes to be confirmed in the test-firing while measuring the time of combat deployment of a super-large multiple rocket launcher,” KCNA said, referring to Kim.

On Tuesday, Seoul’s Joint Chiefs of Staff said that Pyongyang fired two short-range projectiles toward the east from Kaechon, South Pyongan Province. It said one of the projectiles flew 330 kilometers, but refused to provide additional details, such as the maximum altitude and speed, and whether the projectiles hit the East Sea.

Pyongyang said the test-firing fulfilled its purpose, specifying it had conducted two rounds of tests. But experts in South Korea have floated the possibility that one projectile failed to reach the sea and hit land instead, and that the regime may have attempted to launch a third projectile.

“The recent test-firiring was in full line with its purpose and served as an occasion to clearly decide the next-stage orientation to complete the weapon system,” KCNA said. “Two rounds of test-firing took place.”

In pictures released by the state-run media, the four-tube launcher had three of its caps open, appearing as though it may have sought to test-fire three projectiles. When it fired two projectiles from the new multiple rocket launcher last time on Aug. 24, only two caps were open in released pictures. 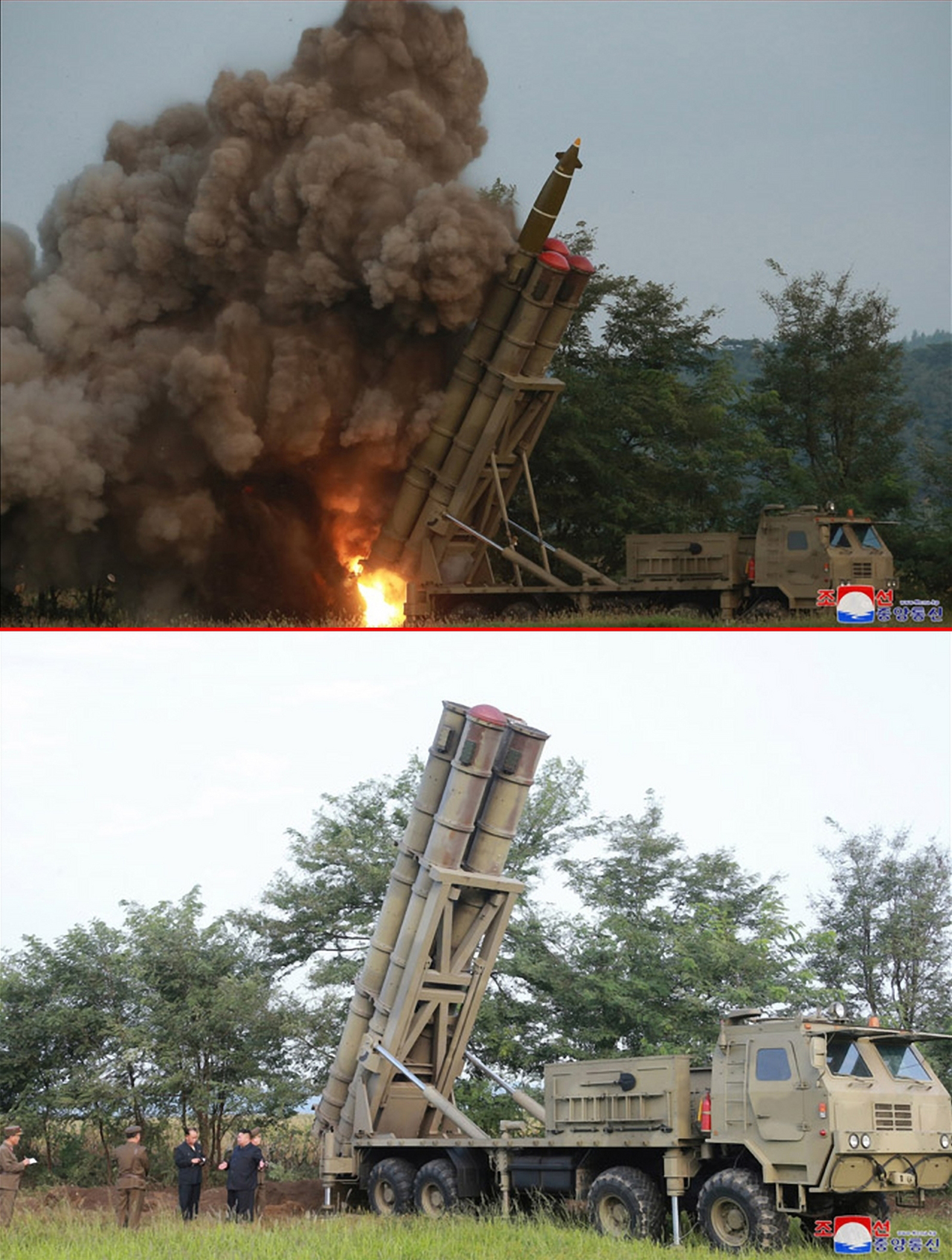 In the photograph (above) released by Korean Central News Agency on Wednesday, three tubes of the North Korea's "super-large multiple rocket launcher" has red caps on, as one tube fires its projectile. After the test-firing, only one tube has its cap on. (Yonhap)
“In the picture, you can see that three of four tubes of the launcher do not have the cover caps, which means that three projectiles were launched,” said Kim Dong-yub, a professor at the University of North Korean Studies.

“It is also interesting that Pyongyang specifically reported that it conducted two rounds of tests, which is unusual.”

Kim also said Seoul’s JCS may have found something strange about the launch and may deliberately have not revealed details about the projectiles.

Other experts say North Korea sought to launch three projectiles, but one of them may not have worked. It has also been pointed out that one of the two projectiles that flew may have hit land, not the East Sea, the likely target.

Regarding the speculations, the JCS confirmed two projectiles were launched, but that it is still conducting a thorough analysis of Tuesday’s launch.

North Korea is expected to conduct additional test-firing of the new weapon. The North Korean leader Kim Jong-un has been quoted as saying that the remaining task would be “running fire-test.”

Pyongyang had boasted about its super-large multiple rocket launcher for the first time on Aug. 24, which Kim praised as an “unforgettably good day.” At the time, the regime fired two projectiles into the East Sea from the eastern town of Sondok, South Hamgyong Province.

North Korea has been seen testing the stability of its weapons systems into the East Sea, by firing from the eastern region close by and then from a location in the west for projectiles to fly across the country.