It is called the “grand national migration,” as Koreans pack up, and set off to visit their hometowns, families, and pay respect to their ancestors during the upcoming Chuseok holidays.

During the four-day holidays, one of the biggest in the nation -- commemorating the autumn harvest -- there are several events being offered to keep oneself entertained.

Film distributing giants Lotte Entertainment and CJ Entertainments are clashing head-on as their heavyweight movies roll out on Wednesday. “Tazza: One Eyed Jack” by Lotte and “The Bad Guys: Reign of Chaos” will hit local theaters at the same time. 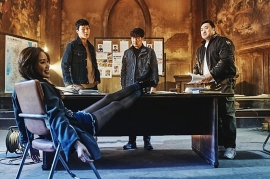 Image from “The Bad Guys: Reign of Chaos” (CJ Entertainment)

Both movies are sequels of successful franchises, with “One Eyed Jack” being the third of “Tazza” trilogy, and “The Bad Guys” is a spinoff of a popular OCN drama. They will be joined by the comedy “Cheer Up, Mr. Lee,” that will herald the return of once-comedy great Cha Seung-won.

Not much is in store for those looking for foreign films, outside of “Playmobil: The Movie” or “100 Dinge, 100 Things” from Germany, although the films have been allocated many movie screens throughout the country,

As of Tuesday, “It Chapter Two” is holding a slim lead in the box office over local film “Tune in for Love,” but its reign is expected to end soon with the two tent-pole films from Lotte and CJ coming up. “Exit,” a sleeper hit of the summer, is staying relevant at No. 3, with accumulated sales of 9.24 million tickets. “Metamorphosis,” on the other hand, is quickly losing altitude at No. 4, having sold just 1.77 million tickets.

For those looking for live performances, popular musicals have rolled out discounts during Chuseok.

The Seoul performance of “Mamma Mia!” is offering up to 20 percent discount between Thursday and Sunday for all seats, while “Jekyll & Hyde” will offer a discount of up to 30 percent from Wednesday to Friday.

“Marie Antoinette” offers up to 30 percent discount for all seats for 2 p.m.-7 p.m. shows on Saturday and 3 p.m. show on Sunday.

In Busan, the world tour of “School of Rock” is offering up to 20 percent discount from Thursday to Sunday. It is among the few musical shows in Korea performed in English. 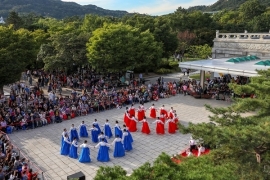 Gyeongbokgang Palace in Jongno-gu, Seoul is one of the most popular tourist attractions in the city. But National Folk Museum of Korea is offering more reasons to visit as they will hold Chuseok events on Saturday and Sunday.

Six types of traditional performances like tightrope walking, and 17 different hands-on experience such as making songpyeon rice cake, will be held throughout the venue.

The performances will be held three times a day in front of the museum building. Among them are a reenactment of “turtle game” -- played during Chuseok to pray for abundance and health throughout the village -- and the traditional circle dance Ganggangsullae, performed to wish for a bumper harvest.

Different types of traditional crafts will be held from 10 a.m. to 5 p.m.

The museum is closed on Friday.

The Seoul Museum of History, also located in Jongno-gu, is holding Chuseok events on Saturday. These include performances of Ganggangsullae and Pungmul, an outdoor performance of Korean traditional folk music that uses drumming, dancing and singing.

A musical performance of an art group consisting of former North Korean defectors will also take place, with their repertoire including popular North Korean songs and dances.