The state-run Korea Electric Power Corp. (KEPCO) signed a memorandum of understanding with Barakah One Co. to jointly win nuclear reactor projects, according to the Ministry of Trade, Industry and Energy.

Barakah One Co. is a joint venture established by KEPCO and the Emirates Nuclear Energy Corp. 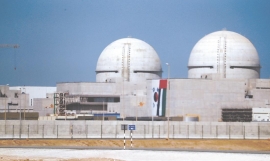 South Korea has been building four reactors at the Barakah nuclear plant, located 270 kilometers from Abu Dhabi, since 2012. The first reactor was completed last year, with the three others also set to be completed in the near future.

The Barakah nuclear plant, which marked South Korea's first overseas nuclear project, is significant as it paved the ground for the two countries to deepen ties in many areas.

The latest agreement signed between KEPCO and the Barakah One Co. will cover a wide range of cooperation, including construction, operation, investment and the fostering of experts, it added.

South Korea plans to share its capabilities and experiences with the UAE, and seek to win new projects from other countries. (Yonhap)