Lawyers for a Democratic Society, more widely known by the Korean acronym Minbyun, had filed a petition with the human rights body Feb. 8 to look into the actions of South Korean authorities in connection with the 12 North Korean women’s entry into South Korea in April 2016. The lawyers’ group cited as their chief evidence 2018 televised interviews with Heo Kang-il, the restaurant’s manager, and five of the waitresses who said they were brought to South Korea against their will.

The rights commission dismissed Minbyun’s petition in a statement issued Monday, saying it “(rejected) petitioners’ claims that state institutions intervened in (the mass entry) of defected restaurant workers into the country.” 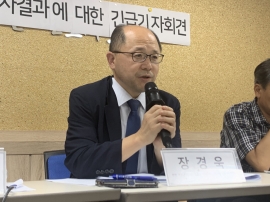 The commission said it reached that conclusion after investigating the Cheong Wa Dae Office of National Security, the Ministry of Unification, the National Police Agency and the Republic of Korea Defense Intelligence Command.

Minbyun, which has advocated for the rights of the North Korean women since the case was publicized through local media reports last year, hit back at the commission’s decisions immediately.

In a press briefing Tuesday afternoon, the group of activist lawyers said the commission had completely disregarded recent findings by an international lawyers’ association.

The fact-finding committee, comprising lawyers from the International Association of Democratic Lawyers, said the South Korean government had committed “the criminal offense of abduction,” following a six-day investigation in Pyongyang from Aug. 30 to Sept. 5. The committee said its final report on the case will be published by the end of this month, to be submitted to the United Nations Human Rights Council.

The commission found, however, that the defense intelligence command’s records surrounding the incident, such as phone call recordings and emails, had been deleted for “unconvincing reasons.”

The commission further pointed out that the intelligence command “should have confirmed the restaurant workers’ volitions in their defection from North Korea more thoroughly.” The armed forces’ intelligence operations had mediated communications between NIS and the manager from February to April 2016.

The commission said Unification Ministry officials who were in office at the time testified that while they deemed the press release about the case to be “inappropriate,” they went ahead with it on orders from Cheong Wa Dae. Then-national security chief Kim Kwan-jin testified, however, that the presidential security office had “no involvement at all” with the press release.

The Park Geun-hye administration’s Unification Ministry notified the press of the North Korean women’s alleged defection on April 8, 2016, breaking the usual protocol of keeping defector information discreet. As the disclosure was made five days prior to the general election, suspicions arose that the move was staged to influence the outcome in favor of the conservative party.

But the commission decided there was a lack of objective evidence linking the case with the election.

The human rights commission advised the NIS, the defense minister, the unification minister, the prosecutor-general and the Korean Bar Association to improve their administration procedures, identify the issues that led to the inappropriate disclosure of information, launch probes into the authorities responsible for the press release and provide legal aid to victims. Under the law, recipients of the commission’s advisories are required to issue responses within 90 days.

Minbyun said it plans to formally accuse the defense intelligence command and the state intelligence agency of attempting to destroy evidence surrounding the incident. It said it will also deliver letters from the women’s families in North Korea to President Moon Jae-in, in which they pleaded for a prompt reunion.