Chang Yong-jun, the 19-year-old son of opposition Liberty Korea Party Rep. Chang Je-won, admitted to driving under the influence of alcohol and attempting to pretend someone else was driving the vehicle, according to his lawyer on Tuesday.

Chang, a rapper who performs under the name NO:EL, was booked and questioned by the police Monday for allegedly crashing his car into a moving motorcycle while driving under the influence of alcohol. The motorcyclist was reported to have sustained minor injuries. 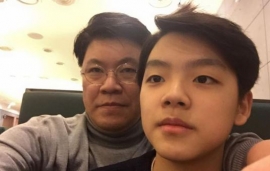 The police on Tuesday questioned a 27-year-old man, who initially claimed to be the driver of a car involved in a drunk-driving accident in an apparent attempt to cover up drunk driving by the high profile lawmaker’s son.
The man was booked on charges of helping a suspect flee.

Chang’s lawyer told reporters Tuesday that the man was the rapper’s friend and had no connections to his father’s office or his music label.

“Chang admits to all his charges and deeply regrets what he did,” his lawyer said, adding he has reached a settlement with the victim.

The lawyer also denied allegations that Chang offered money to the motorcyclist, mentioned his father was a lawmaker or that his mother forced the victim to accept the settlement deal.

Rep. Chang, who apologized for his son’s involvement in the car accident, on Tuesday vowed legal action against “false news reports” in a Facebook post. A local news report raised allegations that the man had ties with the lawmaker’s office.

The junior Chang was driving his car at about 100 kilometers per hour, CCTV footage showed, before hitting the motorcycle in western Seoul on Saturday.

His blood alcohol level at the time was 1.2 percent, subject to a revocation of driver’s license, according to the police.

The rapper is suspected of having attempted to avoid punishment by pre
tending someone else had been driving at the time of the accident, which he reportedly dismissed as “misunderstanding.” He initially told the police that he was not driving the car, but later admitted he was the driver, according to reports.

He also faces allegations that he had attempted to offer money to the motorcyclist to cover up the case, saying his father was a lawmaker.