The new head of South Korea's antitrust regulator on Tuesday said the agency will crack down on tech companies over their abuse of monopoly power and dominant market position.

Joh Sung-wook, the chairwoman of the Fair Trade Commission, said in her inaugural speech that the move is meant to facilitate market innovation, but she did not elaborate. She said last month that the antitrust regulator has been looking into alleged unfair trade practices by two US tech giants -- Google Inc. and Apple Inc. -- as well as South Korea's top portal operator, Naver Corp. 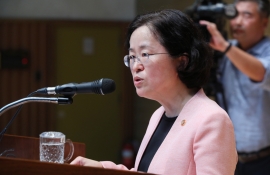 In July, Apple Korea, the South Korean unit of US tech giant Apple Inc., offered to carry out a set of voluntary corrective measures in an move apparently intended to end a legal dispute over its alleged violation of competition law here.

Joh said the commission will tackle lingering practices by large companies to award lucrative business contracts to their subsidiaries.

South Korea has been pushing to stem unfair business practices and level the playing field for smaller firms in a country that has been dominated by family-controlled conglomerates, or chaebol, for decades.

Joh also vowed to strictly apply laws to companies regardless of their size, and to closely monitor and take actions against unfair business practices by not only chaebol but mid-sized South Korean conglomerates with assets less than 5 trillion won ($4.2 billion).

Joh is the first woman to lead the antitrust regulator in 38 years in this male-dominated Asian country. (Yonhap)