North Korea hints at detailed security assurance plan from US

North Korea gave the United States its long-awaited response Tuesday on the revival of denuclearization talks, but warned that without any concessions there could be another stalemate.

Hours after the announcement, the regime fired two unidentified projectiles toward the East Sea, inviting speculation as to its intentions. 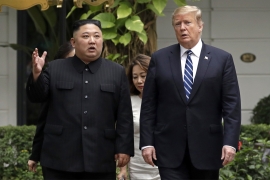 In this Feb. 28, 2019, file photo, US President Donald Trump, right, and North Korean leader Kim Jong-un take a walk after their first meeting at the Sofitel Legend Metropole Hanoi hotel, in Hanoi, Vietnam.(AP-Yonhap)

The North’s First Vice Foreign Minister Choe Son-hui said Monday that the country is willing to have comprehensive discussions with the US in late September at a time and place agreed on by both sides.

“I want to believe that the US side will come forward with alternative proposals that will serve the interests of both sides and is acceptable to us,” Choe said in a statement carried by the official KCNA news agency.

She gave an advance warning that using the same negotiation tactics that Washington harnessed in previous meetings will thwart hopes of striking a deal.

“If the US side toys with the same old proposals without a fresh approach at working-level talks which will be held after stalling, a deal between the two sides may not be possible,” she said.

“I have a very good relationship with Chairman Kim. ... They would like to meet. We’ll see what happens. I always say having meetings is a good thing, not a bad thing,” he told reporters at the White House on Monday.

Washington and Pyongyang remain far apart in their approach to denuclearization. Washington wants North Korea to relinquish all of its weapons of mass destruction first. Pyongyang, on the other hand, says it is willing to give up nuclear weapons in a phased manner in exchange for partial sanctions relief and security assurances.

Failing to close the gap, Trump and Kim walked away from the negotiation table without a deal in late February in Vietnam.

The two leaders met again at the inter-Korean border on June 30 and agreed to reopen working-level talks.

“The North’s demand for changes means that the US should propose plans entailing how it will provide a security guarantee for the regime, elimination of military threat and lifting of economic sanctions in accordance with the sequence for its denuclearization,” said Koh Yu-hwan, a professor of North Korean studies at Dongguk University.

For North Korea, taking steps toward denuclearization means giving up its security blanket, as the regime declared that its quest for nuclear weapons was completed in 2018.

“So it wants to see substantial measures for security guarantees up front, not afterward,” Koh added.

On Sept. 4, US Secretary of State Mike Pompeo assured Pyongyang that Washington would provide a security guarantee when the regime dismantles its nuclear weapons program. Trump also stated that the US is not looking for regime change.

Amid anticipation that US-North Korea talks might take place within weeks, Pyongyang launched two unidentified projectiles, which appear to be short-range missiles and which flew approximately 330 kilometers in an easterly direction, from the Kaechon area in South Pyongan Province.

South Korea’s presidential office held an emergency National Security Council meeting and expressed strong concerns that North Korea has continued to launch short-range projectiles. It was the 10th such launch since early May.

Pyongyang is trying to send a message that Washington should not meddle in self-defense measures such as arms modernization efforts, including the test-firing of projectiles, said Hong Min, director of the North Korea research office at the Korea Institute for National Unification.

Trump has downplayed the series of missile tests, saying he recognized the North’s self-defense rights as a sovereign state to conduct a small missile test, which many countries do.

“Today’s launch is unlikely to have an impact on their nuclear talks as the US has said it can tolerate them,” Koh said.