Yaba, a psychotropic narcotic referred to as the “madness drug,” has shown a steep rise in the amount trafficked to Korea, reaching its highest known figure, prosecution data showed. 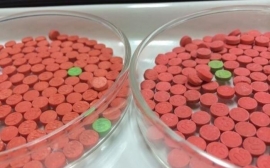 According to the prosecution on Tuesday, this year, 10.015 kilograms of yaba had been smuggled into South Korea by July. The number is almost a sevenfold increase from 1.267 kg in 2013, and almost double the 5.465 kg brought in the same period last year.

The illegal substance, sold in tablet form, is a combination of methamphetamine and caffeine. Yaba is produced and commonly used in some Southeast Asian countries, particularly Burma and Thailand.

Thai nationals involved in illicit drug rings in their home country have been caught smuggling in the drugs through international mail and supplying them to foreign laborers here for around 50,000 won ($42) per pill. In June, police seized 14,118 tablets in Busan that had come in from Thailand via air.

To beef up its international cooperation in the crackdown of yaba, the prosecution has strengthened ties with overseas anti-narcotics bodies. It has dispatched prosecutors to the Thai government’s narcotics control office. The prosecution is currently tracking down a Thai national who is believed to have sneaked in 30,000 Yaba pills via mail in March through such cooperative investigations.

“We are trying to fundamentally eradicate and prevent the yaba trafficking by tackling the overseas producers and the domestic suppliers and receivers at the same time.” the prosecution said. “This has shown results, as the amount of the drugs being smuggled into South Korea, which has seen a constant increase until June, has been rapidly decreasing since July.”