The Korea International Trade Association said Tuesday it will offer selected local startups a test bed to showcase their innovative technologies and services in hopes of vitalizing the ecosystem.

According to KITA, Coex Startup Testbed provides opportunities for budding startups to test ideas and technologies that could be implemented in the service industry at Coex.

After several stages of expert reviews, startups that make it to the final roster for the test bed will be given the chance to collaborate with Coex, Coex Aquarium, Korea City Air Terminal and World Trade Center Seoul, KITA said.

On Tuesday, KITA began the initial stage of selecting startups. Of the 198 firms that signed up for the program, 47 were invited to one-on-one meetings with experts at Coex. 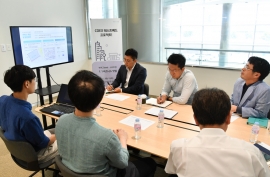 Representatives of startups and experts attend business meetings at Coex in Seoul on Tuesday. (KITA)

An official from Twinny Robotics Lab said the test bed would allow startups to commercialize and promote their technologies.

Lee Dong-ki, executive managing director of the Innovation and Startup Group at KITA, echoed the sentiment, saying that turning Coex -- a symbol of Seoul’s global business hub -- into a platform for startups to grow would help vitalize the ecosystem.

Furthermore, Lee said KITA plans to allow overseas startups to participate in the program next year, to promote interaction between companies.