With a labor union strike continuing at the National Cancer Center, more patients are deciding to leave the state-run hospital.

Workers at the hospital went on strike over pay conditions on Sept. 6, marking the first strike at the center since it opened in 2001.

“Throughout its 18 years of existence, there have never been wage negotiations at the National Cancer Center,” the NCC branch of the Korean Health and Medical Workers’ Union said. Nurses and nurse aides make up the majority of the union’s membership. 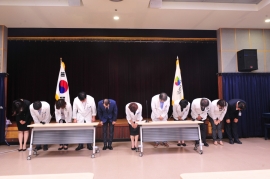 The union has demanded a 6 percent on-year wage raise. However, the hospital says this is not feasible, as the government has restricted the pay raise at public institutions to 1.8 percent.

The union has also called for more workers to be hired, shorter working hours and guaranteed overtime pay.

“It is an unprecedented state of affairs that a strike should interrupt the operations of a hospital for over five days,” the center’s director Lee Eun-suk said during a press conference Tuesday.

“We have informed the government about our circumstances and pleaded for improvements, especially securing sufficient funds so as to be able to comply with regulations on overtime pay,” she said.

The National Cancer Center under the Ministry of Health and Welfare is a clinical research institute and hospital in Ilsan, Gyeonggi Province. 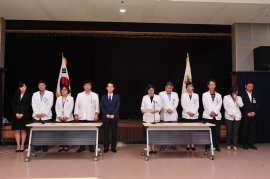