The Cabinet on Tuesday passed a bill on government support for job seekers in the low-income bracket who do not have employment insurance.

The beneficiaries would include first-time job seekers, women whose careers have been interrupted and self-employed people who went out of business. 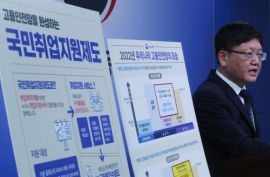 To receive the monthly allowance, job seekers have to prove they are looking for jobs, based on their plans submitted to employment centers.

The government will also provide job seekers with help in various areas including vocational training, job consulting and writing resumes. Job seekers aged between 18 and 64 from households with less than 100 percent of the median income will be eligible to apply for such services.

In addition, people who have fled from North Korea, dropped out of school, or are from single-parent families can receive such support even if they do not meet the income requirements. Soldiers who have about a year left before being discharged from military service will also be eligible.

According to the Ministry of Employment and Labor, about 45 percent of all employed people are not covered by employment insurance.

This would complete a multilayered employment safety net for some 2.35 million people, including 1.4 million people covered by employment insurance and 350,000 people working temporary jobs created by the government, the ministry said.

The ministry plans to submit the bill to the regular National Assembly session in September. It expects the bill to take effect in July next year.