Police said they had suspended indictment procedures for a man suspected of issuing an online threat to assassinate President Moon Jae-in. The decision was made owing to the man’s foreign citizenship, and police have enlisted the help of international authorities in tracking him down. 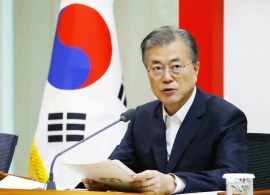 Seoul Gangbuk Police Station said Monday that the man, who allegedly posted the threat last month, turned out to be a foreign national living overseas. Police did not release additional information about the man.

Police added that they had asked Interpol to issue a Red Notice for the man, whom they had difficulty locating.

On Aug. 3, on a far-right website commonly known as Ilbe, a user claimed to have illegally obtained a gun with the intention of assassinating the president. The authorities said the website’s administrators had provided access logs and other account information for the user in question and confirmed that the photo of the gun had been taken from another website.