Posco, South Korea's largest steelmaker, said Monday it reached a deal with its labor union on a wage and collective bargaining agreement that includes a 2 percent raise in base pay.

The union put the deal to a vote earlier in the day, with 86.1 percent, or 5,449 workers, choosing to accept it, the company said.

Posco and the union had tentatively reached an agreement late last month in negotiations in which the labor union was seeking a 4 percent raise in base pay.

Posco and its labor union began this year's collective bargaining in May. 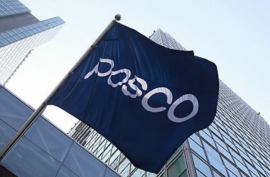 Besides the raise in base pay, the deal also includes adjustments in retirement age and other benefits for workers, as well as expanded welfare support.

Posco, founded in 1968, had its first union in the late 1980s, with its membership peaking at more than 18,000. But a separate labor union was set up in 1997 after the older labor union's leadership was embroiled in a bribery scandal.

The two labor unions since then have fought to win bargaining rights as the formal representative of the workers. Last December, the provincial office under the labor ministry granted the older group legal bargaining rights, citing its larger membership.