For the past 15 years, the Busan-Jinhae Free Economic Zone in South Gyeongsang Province has succeeded in developing infrastructure and creating a suitable business environment for investors. And now is the time to seek a paradigm shift by nurturing innovative technologies and easing regulations for the growth of new industries, its new chief said.

In an interview with The Korea Herald, BJFEZ Commissioner Ha Sung-cheol said he seeks to attract companies specialized in manufacturing high value-added, high-tech components and integrated logistics services as well as research and development units of universities and institutes to nurture local talents and create quality jobs.

“So far, BJFEZ has achieved success with the rate of land development and ground transport links reaching 95.7 percent and 80.2 percent, respectively,” Ha said.

“But now we are seeking a paradigm shift from the first phase of BJFEZ that focused on infrastructure building to the second phase that centers on innovative growth of industries to improve global competitiveness (of the economic zone).” 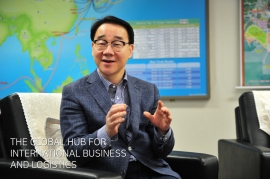 The plan comes along with the central government’s plans to nurture eight major innovative industries. For sustainable growth of the country’s economy, the Moon Jae-in Administration said last year that it would support the development of future mobility, bio health, fintech, new energy and drones. The list also includes development of smart factories, smart cities and smart farms.

“Focusing on the eight leading industries, we will attract companies for the ‘fourth industrial revolution’ to improve the structure of the regional industries. We will also improve regulatory measures that block activities of innovative enterprises by utilizing the special law on nurturing innovative firms,” he said.

With a land area of 51.1 square kilometers, 18 times larger than the size of Seoul’s financial district of Yeouido, BJFEZ is one of the eight Korean free economic zones, specially designated to attract foreign investments to support regional development and improve the business environment as well as living conditions.

Launched in 2003, the BJFEZ Authority has been taking the lead in turning what was once a wasteland into a global business and logistics hub. Ha, formerly with the South Gyeongsang Provincial Government, is the seventh commissioner of the authority.

Turning BJFEZ into a world-class logistics and business hub is an ongoing process, he said.

“Tri-port,” a concept of an integrated harbor that links maritime, ground and air transportation, is at the center of his strategy, stressing the economic zone’s logistics advantage.

Busan New Port, a major construction project planned to be completed by 2030 is the core asset of the tri-port, he said. The new port will help the economic zone become the center of Northeast Asia, connecting the Pacific Ocean and Eurasia, he added.

Opened in 2010, the port has been expanding to handle 45 vessels simultaneously by 2030. It currently handles more than two-thirds of the cargo transported to Busan, the country’s largest logistics hub and a major gateway to ports in Japan, China and Russia.

The talk of linking inter-Korean railways will raise the profile of BJFEZ as truly an international logistics hub, Ha noted, highlighting that it will help the economic zone secure physical connectivity to markets in China and Europe if the theme of transcontinental railway is realized.

“The key players in establishing and operating integrated logistics system are global logistics companies. We will create an environment where companies save logistics costs by fully operating the integrated system that connects harbors, airports and ground transportation,” he said.

When asked of future plans for other districts in the BJFEZ, the new chief said that the Jisa and Dudong regions are the R&D centers for new material, information technology, energy and marine engineering and are on the course of expansion. Undong is the center of leisure and tourism housing various facilities including golf courses hotels, sports parks and outlets. Myeongi has global business centers, education, medical institutions and residential areas to support foreign investors, he said.

BJFEZ is currently striving to attract foreign direct investment amounting to $210 million by the end of this year.

To be eligible for tax reduction, foreign companies must invest over $10 million in tourism, $5 million in port logistics, or $1 million in R&D.