World Energy Council Chairman Younghoon David Kim highlighted that innovative technologies are key to fostering the future development of the energy industry and resolving current crises like climate change during the 24th World Energy Congress that kicked off Monday.

Hosted by the World Energy Council, the four-day event is being held in Abu Dhabi, the United Arab Emirates, under the theme of “Energy for Prosperity.” It is being attended by about 15,000 people from the energy sector representing over 150 countries, including representatives of global energy companies and international organizations, academics, heads of government and top energy department officials. 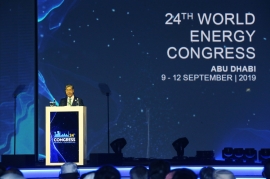 “We, the global energy leaders, are acutely aware of the pressing need for change to make sure the development (of the energy industry) is sustainable both in terms of supply and demand for the benefit of all,” said Kim, who is also Daesung Group chairman, in his opening speech Monday.

“At the World Energy Congress, we have now recognized the urgent need to combine the use of all existing technologies and the pursuit of out-of-the-box technologies with creative policy thinking and business model innovation. This combination will help us overcome the inherent tensions within the Trilemma (Index),” he said.

He also highlighted the new program of the energy congress, which is devoted to 100 energy startups excelling in facilitating the energy transition and combating climate change.

“It is my sincere hope that entrepreneurs and technologists from startup energy ventures like you will feel more comfortable in the future with the World Energy Council community. We will keep reaching out to you as partners for prosperity,” he said.

The event has invited around 300 speakers and panelists, including Prince Abdulaziz Bin Salman Al Saud, Saudi Arabia’s state minister of energy affairs, Alexander Novak, minister of energy of the Russian Federation, and Dan Brouillette, deputy secretary of the US Department of Energy.