SEJONG -- A large portion of online commenters say that the Moon Jae-in government should be held accountable for letting housing prices spiral out of control since taking office in May 2017.

A variety of data showed that Seoul apartment prices climbed sharply between 2017 and 2018, compared to figures during past administrations.

In 2012, apartment prices in Seoul posted the negative growth of 6.1 percent on-year, hit by the subprime mortgage fiasco in the US and the global financial crisis.

Prospective home buyers look around a model house for a Jungheung S-Class apartment complex, to be built at the Unjeong residential new town in Paju, Gyeonggi Province, by May 2022. (Jungheung Construction)

The previous Park Geun-hye administration, which took office in 2013, implemented deregulations to make it easier to take out mortgage loans. The policy was aimed at boosting the economy by reinvigorating the real estate and construction sector.

Many households that did not own their homes, however, held off from taking advantage of easier borrowing conditions between 2014 and 2016, in anticipation that a liberal administration might take over and rein in prices again.

This created a supply shortage in Seoul, as owners of multiple homes became reluctant to sell, which in turn fanned price growth.

In response to this development, the government decided to give tax benefits for multiple-home owners who rent out their properties. This triggered criticism among the wider public that the Moon administration’s policies were helping the wealthy and still hampering those who want to buy houses.

Further, unlike “rapid” hikes in capital gains taxes when trading apartments, the Moon administration’s real estate tax hikes for those -- who were just holding two apartment units or more -- have been quite “modest.” As a result, owners of multiple homes do not feel an urgent need to dispose of their properties, as their tax burden is not high as long as they do not sell them. 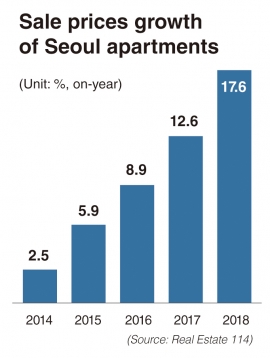 Some apartment complexes in southern Seoul are estimated to have increased in value by between 50 percent and 80 percent over the corresponding two years.

“Some apartment units in Gangnam and Seocho districts have jumped nearly 1 billion won ($837,000), compared to prices in 2016,” a real estate agent in Gyeonggi Province said.

He cited the Land Ministry’s designation of “speculative areas” in all of the 25 wards in Seoul and some satellite cities as well as high capital gains taxes for main factors for the spike in Seoul apartment prices.

The regulation-based policies have stopped ordinary households from purchasing homes in the popular speculation-designated areas.

With lending rules for commercial banks still limiting the proportion of a house purchase that can be funded by a mortgage, only those with large amounts of cash have been able to buy apartments in southern Seoul, priced at 1.5 billion to 3 billion won per unit, and some other popular districts.

Many households that rent their homes had to move to Gyeonggi Province as they could no longer afford housing costs in Seoul, despite working there.

Recently, the administration has suggested another measures to curb property prices. The Land Ministry is poised to place a price cap on new apartment offerings built by private constructors, staring from later this year.

But this incurred worries that the apartment price-ceiling will also create a supply shortage, with builders expected to construct apartments in a more conservative manner to prevent their operating profits from falling.

Despite the government’s unveiling of the coming real estate policy, Seoul apartment prices rose 0.03 percent during the first week of September, according to the Korea Appraisal Board.

Further, it marked growth for the 10th consecutive week since the first week of July.

An apartment complex in Daechi-dong, Seoul posted more than 2.75 billion won per unit with 84 square meters. The cost of a unit in Doksan-dong, Seoul -- though it is an unpopular district for the wealthy bracket -- has climbed to 900 million won.

Meanwhile, amid intense competition for the apartment subscription system in Seoul, the incumbent government’s preferential treatment for newlyweds, mainly in their 20s and 30s, has further raised competition among those in their 40s and 50s.