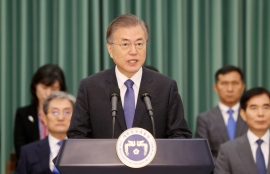 In appointing the officials, Moon apologized to the public over the repeated appointments without the National Assembly adopting a confirmation hearing report, and promised to see the drive to reform government organizations through.

“With regards to Justice Minister Cho Kuk, there were many allegations, and his spouse has been indicted and there were fierce clashes (between those) supporting and opposing (Cho’s) appointment,” Moon said, adding that he has chosen “principles and consistency” over the possibility of Cho’s appointment creating a social rift.

Highlighting that the developments leading up to and including the parliamentary hearing have uncovered no illegal actions on the part of Cho, Moon said that not appointing him based solely on allegations would leave a bad precedent.

In a rare speech given at the Cabinet members’ appointment ceremony, Moon reiterated his determination for reform.

“In the last presidential election, I set forth reform of (government) organizations with power as one of the most important pledges, and that pledge was supported by the people,” Moon said.

Saying that he has put the pledge into action, he said he hoped that the people recognize the results of the reform drive so far and that the reform must now be codified into law. 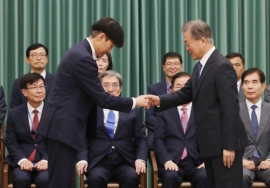 “I have clearly stated that the reason for nominating Cho, who has striven with me for reform and achieved results, is to entrust Minister Cho Kuk to complete (the reform).”

He added that the justice minister and the prosecutors’ office carrying out their duties independently of each other would set a milestone in reforming powerful government organizations.

Adding that the developments surrounding Cho have shown the people’s desire for a fair society, Moon went on to say his administration’s reform drive will continue with an emphasis on the education system.

The new justice minister echoed Moon in saying that he would see the reform plans through to completion.

“I think that my being appointed as the justice minister means that the task of judiciary and prosecution reform that had long stood incomplete must be completed,” Cho said in his inauguration speech.

Cho also said he would support efforts to revise laws so as to establish an independent investigative body for high-level government officials and adjust the investigative authorities of the police and the prosecution within the 20th National Assembly. The next general elections are scheduled for April 15 next year, and the 21st National Assembly will begin its operations May 30, 2020.

An independent investigative body for handling corruption among high-level officials was a major part of Moon’s reform-related pledges.

“(I) will ensure that the Ministry of Justice and the prosecutors’ office do not stand atop the people. I will endeavor to systemize judicial and prosecution reform.”

Since Cho’s nomination last month, a series of allegations have been raised against Cho and his family, including those related to the family’s suspected dubious investments in a private equity fund and his daughter’s academic credentials.

Cho’s daughter is alleged to have received unfair advantages during her high school years that aided her in entering medical school. It has also been alleged that Cho’s wife, professor Chung Kyung-shim of Dongyang University, forged a commendation certificate her daughter received from her university.

The prosecution was quick to respond to the allegations, launching a sweeping investigation into the case with the backing of Prosecutor General Yoon Seok-youl.

A number of Cho’s family members have been banned from leaving the country, and Chung has been indicted without detention on suspicion of forging official documents. It has also been reported that the prosecution is mulling bringing charges against Cho’s daughter.

The unprecedented criminal investigation related to a ministerial nominee has raised speculations of friction between Cheong Wa Dae and the prosecutors’ office. Yoon’s appointment as the prosecutor general was fiercely resisted by the main opposition Liberty Korea Party and supported by the ruling Democratic Party.

The parties’ stances on Yoon have since reversed, with some in the ruling bloc raising accusations that the investigation into Cho is a ploy to resist reform of the prosecution.

With the investigation set to continue regardless of Cho’s appointment as justice minister, some have raised concerns that the probe will lose steam.

Cho’s appointment also poses a major risk to Moon, whose approval rating has nearly halved compared to its peak. At its peak, Moon’s rating soared above 80 percent, but the figures have hovered in the 40 percent range in recent weeks.

Public opinion on Cho as justice minister has leaned toward the negative, with those opposing the appointment outnumbering supporters in most major polls.