The Korea Herald is publishing a series of articles to look into the weakening of global economic frameworks in light of fading liberalism and rise of trade protectionism and nationalism. This is the first installment. -- Ed.

This year marks the 75th anniversary of the Bretton Woods Agreement, which laid the foundation of the liberal economic order in the post-World War era and led to the establishment of the International Monetary Fund and World Bank.

But it is also likely to be remembered as the turning point in history when leading economies essentially confirmed the denial of liberalism, regressing to nationalist and populist ideals.

The rise of Donald Trump as US president signaled the end of the liberal world order that had prevailed for most of the 20th century, as the Council on Foreign Relations President Richard Haass wrote in his landmark column “Liberal world order, R.I.P.” in March 2018.

As noted in its recent set of policies, the world’s most powerful country has been gesturing to depart from its long-held role as guardian of liberalism.

The Trump administration’s anti-liberalism actions included scrapping the 2015 nuclear deal with Iran, and withdrawing from the Paris Climate Agreement, Trans-Pacific Partnership and UNESCO.

As for the North Atlantic Treaty Organization, the US president labeled it “obsolete,” denying its function as a forerunner institution in the Western liberal-democratic world.

“The liberal world order cannot survive on its own, because others (than the US) lack either the interest or the means to sustain it,” Haass wrote.

“The result will be a world that is less free, less prosperous, and less peaceful, for Americans and others alike.”

Confirming Haass’ pessimistic analysis was the Group of 20 summit held in Osaka, Japan, in June this year, where the world’s major economies failed to include the issue of trade protectionism in their final communique, mainly due to disapproval from the US.

Though the meeting of US President Trump and Chinese counterpart Xi Jinping released some steam from the escalating US-China trade friction, the multilateral summit clearly displayed the big economies’ refusal to reinstate liberal order. 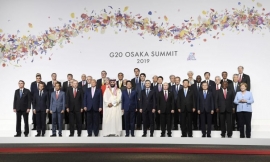 State leaders pose for group photograph on June 28, the last day of the 2019 Group of 20 Summit held in Osaka, Japan. (Yonhap)

Some, on the other hand, claim that Trump alone could not be seen as the cause of the currently changing world order.

“That (liberal) order was destined to fail from the start, as it contained the seeds of its own destruction,” John Mearsheimer, the R. Wendell Harrison Distinguished Service at the University of Chicago, has said several times in his books and columns.

It is the claim of the senior realist scholar that the US’ reckless efforts for democracy and globalization triggered nationalism and populism, which in turn boosted the “Trump phenomenon.”

Regardless of the reason, the ongoing decline of liberal free trade order is highly likely to act to the disadvantage of midsized, trade-reliant economies such as South Korea, experts have pointed out.

“Trade protectionism inevitably leads to the formation of economic blocs and the progress of the ‘fourth industrial revolution’ to a winner-takes-all order,” said Ahn Dong-hyun, professor of economics at Seoul National University.

“Amid the changing world trade order, (Seoul) should break away from its neutral stance and make a strategic choice of a preferential bloc in order to prevent economic and political isolation.”

Kwak Ro-sung, a professor at Dongkuk University, also advised that it may be time for policymakers to step away from the conventional “balance” strategy.

“Korea has long advocated a two-way road map, prioritizing the US in the field of national security and China in economy,” he said.

“But it now finds itself in an awkward position, wedged between the two countries that are engaged in a trade war.”

Aggravating the negative impact of trade protectionism was Seoul’s recent friction with Tokyo.

“(Seoul) government should refrain from making emotional responses to every trade friction as such attitude may only isolate the country in the international society.”

Despite the immediate industrial impact and the sense of crisis, however, the Japan factor may also have marked a breakpoint for Asia’s fourth-largest economy, some have noted.

“Crises may turn into opportunities, as was the case in 2010 when China imposed export curbs on rare earth resources, which pushed local industries to localize and diversify their supplies,” said Kwak.