Several of them chose to visit Myanmar exclusively –- from Tuesday to Thursday -- skipping Moon’s other destinations such as Thailand and Laos. Eyeing its economic potential and geographical attractiveness, they clinched new deals and partnerships with the country called Asia’s “last frontier,” due to its last minute decision to open doors to foreign investors less than a decade ago. 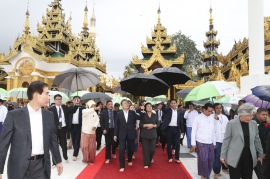 Among them was Posco International, the trade and resources development arm of Korea’s leading steelmaker, which said Thursday it completed construction of a rice processing complex in an area connecting the country’s main rice-producing Ayeyarwady region and Yangon Port.

The complex’s annual production capacity will reach 86,000 tons, the firm said. Combined with its previous investment in a separate complex in Myanmar that generates an annual 15,000 tons, the firm is expected to gain local infrastructure that produces and distributes 100,000 tons of rice every year.

Posco International, which has pursued the milling processing project since the early days of Myanmar’s opening of its economy, plans to export the rice to China, Middle East, and Europe, taking advantage of Myanmar’s geographical state.

“Myanmar has a lot of several uncultivated land and minimizes use of fertilizers resulting in higher productions,” a Posco International official said in a statement.

“The Myanmar government is also carrying out economic policies centered around its agricultural sector, meaning that its rice-processing business has high growth potential,” he added.

Myanmar’s abundant natural resources is not the only factor that attracts South Korean businesses -- sensing its desire to expand its financial sector, CEOs of South Korea’s major commercial banks inked several deals that aim to expand their presence within the country.

On the sidelines of the South Korea-Myanmar Economic Cooperation Forum held Wednesday, Woori Financial Group, one of the nation’s largest banking firms, signed a memorandum of understanding with the Union of Myanmar Federation of Chambers of Commerce and Industry.

They aim to aid firms in both countries hoping to enter each other’s markets and will cooperate in exchanging information related to application processes, financial business and investment and providing support for the companies. 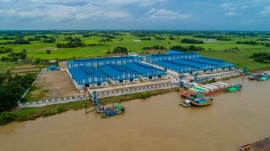 Shinhan Bank, another major commercial lender here, also signed an MOU with the Korea Trade Insurance Corporation in Myanmar on Wednesday, to financially support Myanmar importers of South Korean products. KTIC plans to issue export insurance to Shinhan’s Myanmar branch and using the insurance as a guarantee, Shinhan will be able to offer loans to local firms.

Chiefs of Industrial Bank of Korea and KB Kookmin were also visiting Myanmar to further foster their own businesses.

For the moment, Shinhan is the only Korean bank operating a branch there, while most lenders operate offices. Their business has been largely restricted to loan services for foreign entities in foreign currencies, with the Myanmar government’s yet cautious stance.

Despite the government’s strict attitude, Myanmar continues to be a lucrative market for Korean lenders, who are making an aggressive foray into the market in recent years. The country launched its own Yangon Stock Exchange in 2015, indicating its willingness to further open up its financial market.

Korea and Myanmar also plan to build a joint industrial zone just north of Yangon by 2024.

Myanmar has been maintaining an annual economic growth rate of around 7 percent in recent years.