Members of the main opposition party who opposed the move said Friday’s hearing would legitimize Cho’s nomination at a time when President Moon Jae-in is already widely expected to appoint Cho as Justice Minister with or without the hearing.

“(Na) agreed to the hearing, waving the white flag. What main opposition exonerates a nomination through a futile and pointless hearing? ” Rep. Chang Je-won of the Liberty Korea Party said on social media. 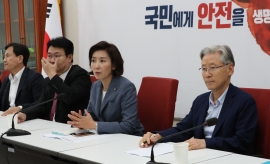 “It is inevitable to question the party leadership’s strategy in agreeing to a hearing without a single witness and one that has been shortened to a day when two days are guaranteed.”

Chang added the party should seek a parliamentary investigation into allegations involving Cho and his family.

Na had originally agreed Cho’s hearing would take place from Sept. 2-3, but she had veered away from the deal, only to later compromise with a one-day hearing without Cho’s family members as witnesses -- two key conditions the main opposition had previously insisted on.

After reaching a consensus with the ruling party earlier this week, Na said the decision was made to “fulfill the National Assembly’s responsibilities.”

Liberty Korea Party members on the National Assembly’s Legislation and Judiciary Committee opposed Friday’s hearing, with some considering resignation from the committee or boycotting the hearing.

“She must have many weaknesses to have agreed to such a deal. It is difficult to understand. … It seems like a dummy agreement aimed at obtaining legitimacy for Cho’s nomination,” Hong said on social media.

Meanwhile, Liberty Korea Party Chairman Hwang Kyo-ahn has called on President Moon to withdraw Cho’s nomination to the justice minister post, and asked for Cho to step down and undergo investigation by the prosecution.