[News Focus] Koreans 5 years older, on average, than a decade ago

SEJONG -- South Korea has become one of several countries undergoing rapid demographic changes that could dent the nation’s competitiveness in the mid- to long term.

With fewer babies being born, senior citizens make up a growing proportion of the Korean population and the average age has climbed over the past decade.

According to the Ministry of Interior and Safety, the average age reached 42.4 years as of August, as compared with 41.9 a year earlier.

The average ages for men and women were 41.3 and 43.6, respectively, across the country. 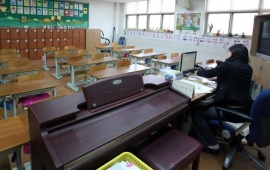 An elementary school classroom in Gyeonggi Province shows that the number of desks is less than half what it was in the 1980s. Schools in major cities have scaled back classes over the past decade as a result of the declining birth rate. (Yonhap)

Compared with the nationwide average of 37.4 in August 2009, the country had aged five years to 42.4 on the whole a decade later. The average age reached 40.0 in October 2014 for the first time in history.

Moreover, comparisons of the percentage of older and younger people against the population as a whole reveal worrisome changes to the nation’s demographic structure.

In contrast, those aged 65 or over made up 15.2 percent of the total, up 5 percentage points from 10.5 percent a decade ago.

As the number and proportion of senior citizens increased, the working-age population -- those aged between 15 and 64 -- fell from 72.7 percent to 72.2 percent of the total over the past decade.

According to the Interior Ministry data, Korea’s working-age population peaked at 37.78 million in November 2016.

The figure has dropped consistently since December 2016. As of August 2019 it stood at 37.43 million, having declined for the 33rd consecutive month. That amounts to 350,000 fewer people in less than three years.

In addition, last month’s figure marked the lowest in five years, since August 2013, when the number of people aged 15-64 posted 37.41 million. 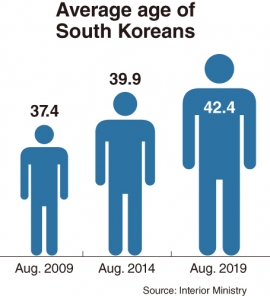 In other words, the working-age population is shrinking in proportion to the population as a whole.

A government official said the drop in recent years is critical as the baby boomer generation, born between 1955 and 1963, still belongs to the working-age population.

He predicted a steeper decline in the working-age population beginning in 2020, when people born in 1955 become senior citizens.

There is another risk factor, according to analysts. Those born between 1968 and 1974, known in Korea as “the second generation of baby boomers,” are currently in their mid-40s to early 50s.

As this generation ages in the coming decade, the percentage of Koreans in their 40s, considered the backbone of the nation’s industries, will fall drastically.

Statistics Korea forecast that the proportion of people aged 65 or over would break the 20 percent mark by 2025 and 30 percent by 2036.