A fact-finding committee composed of international lawyers said the high-profile mass defection of North Korean restaurant workers in 2016 was really an abduction.

In a preliminary report on the committee’s investigation in Pyongyang, released Wednesday, committee chiefs Jun Sasamoto and Niloufer Bhagwat concluded “the twelve women employees were brought to South Korea by deception against their will” and that “this constitutes the criminal offense of abduction.”

During their visit to Pyongyang from Saturday to Thursday, the two lawyers spoke with seven former employees of the restaurant, as well as the families of the 12 women who reportedly defected to South Korea in April 2016. The Unification Ministry under the Park Geun-hye administration announced the large-scale defection April 8, 2016, five days prior to a parliamentary election, breaking the usual protocol of keeping defector information discreet.

The committee said the women testified that the restaurant’s manager Heo Gang-il had informed the 19 employees, including the 12 alleged defectors, that they were to relocate to Malaysia on instructions from high-ranking North Korean authorities.

The women told the lawyers Heo was in a position of power over the workers at the restaurant in Ningbo, a city in the northeastern Chinese province of Zhejiang, and kept their passports. The women also told them that the manager was heavily in debt and unable to repay loans he had taken out in China. 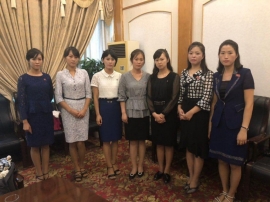 Seven North Korean women, who were former colleagues of the alleged defectors at the restaurant in Ningbo, China, spoke with the fact-finding committee on Monday at a hotel in Pyongyang. (IADL, Minbyun)

According to the lawyers, one of the seven women, Choe Rye-yong, said she had seen and overheard a conversation between Heo and a South Korean intelligence service official who had come to take the waitresses to the Shanghai Pudong International Airport. The lawyers said Choe told them she had managed to inform some of her colleagues and escape with them, although 12 others had already left by bus.

The lawyers said the parents of the 12 women told them they were “in a seriously disturbed state,” as they had not “seen or heard from their daughters after they were taken away to South Korea.” The parents told the lawyers they had informed the United Nations Human Rights Council of the issue through the National Reconciliation Council of North Korea.

The lawyers said they also spoke with officials at the North Korean Emergency Measures Committee of Abducted Persons, who told them their government had sent “several diplomatic protests and communications” to the South Korean government, which went unanswered.

The human rights body’s communications officer told The Korea Herald that, in the meantime, the content and results of its probe will be kept confidential for security reasons and that the proceedings are usually not open to public. He also said certain cases are filed as non-disclosures for concerns of further victimization, among others, and that decisions for disclosure must be put to a vote at the board.

The Unification Ministry’s deputy spokesperson Kim Eun-han told The Korea Herald that the ministry will issue a response that respects the human rights commission’s findings. He added that at the time of the defection, the authorities in charge had confirmed the women’s intentions to settle in South Korea.

The International Association of Democratic Lawyers launched the fact-finding committee in May following media reports that South Korea’s National Intelligence Service may have orchestrated the defection of the waitresses. Sasamoto and Bhagwat serve as secretary-general and vice president, respectively, of the association’s Asia-Pacific subgroup, the Confederation of Lawyers of Asia and the Pacific.

During a press conference held Aug. 29 in Seoul, Sasamoto and Bhagwat criticized the National Human Rights Commission of Korea for having “suspended publishing the results of its investigation, which has already been finalized,” saying the “delay itself indicates there may be something to be concealed.”

Jang Kyung-wook, a representative of Lawyers for a Democratic Society -- more widely known by the Korean acronym Minbyun -- said the committee’s contacts and meetings with relevant people and authorities in Pyongyang were facilitated by the Korean Democratic Lawyers Organization, a North Korean member group of IADL.

The committee said the final report on the case will be published by the end of the month, to be submitted to the UN Human Rights Council. 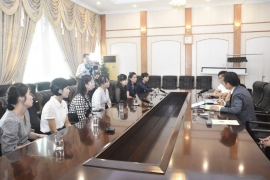 Seven North Korean women, who were former colleagues of the alleged defectors at the restaurant in Ningbo, China, speak with the international lawyers on Monday at a hotel in Pyongyang. (IADL, Minbyun) 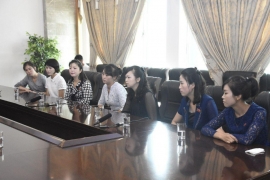 Seven former employees at the restaurant in Ningbo, China, photographed on Monday at a hotel in Pyongyang. (IADL, Minbyun) 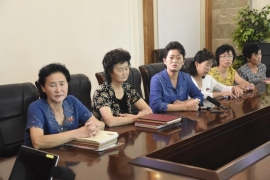 Parents of the 12 North Korean women, believed to have defected to South Korea in April 2016, speak to the fact-finding committee on Tuesday. (IADL, Minbyun)