The advance pricing arrangement is an ahead-of-time agreement between the tax authorities of the two countries to specify a pricing method that a South Korean company will apply to its transactions with its subsidiary in China. 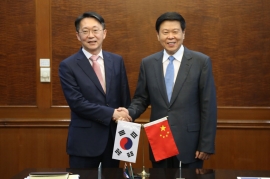 The arrangement can make it possible for tax officials to verify if a subsidiary operating in China intentionally marked up or lowered prices of products and services it received from its South Korean parent company, so as to pay less taxes.

The deal -- inked between National Tax Service Commissioner Kim Hyun-jun and his Chinese counterpart Wang Jun in Beijing -- would allow selected South Korean companies to be exempted from Chinese tax probes on the transactions, the National Tax Service said, without giving any further details on how many South Korean companies will receive the benefit.

More than 27,400 South Korean companies have been operating in China, with $66.5 billion having been invested so far.

Two-way trade between South Korea and China reached $268.6 billion in 2018, up from $240 billion the year before. China is South Korea's largest trading partner. (Yonhap)