Public institutions to expand investments to W55tr this year

South Korea’s top fiscal policymaker said Wednesday that public institutions will expand the size of their combined investments to 55 trillion won ($45.5 billion) this year as part of the government’s continued struggle to revitalize domestic economy amid growing uncertainties.

“(The government) will ensure that public institutions make investments of 55 trillion won within the year, by advancing the timeline of some incoming investment projects,” said Deputy Prime Minister and Finance Minister Hong Nam-ki in an economic revitalization policy meeting.

The updated target figure was a hike of 2 trillion won from the initial plan announced in January, and a visible jump from last year’s 43.5 trillion won.

The corresponding projects to be sped up -- worth around 1 trillion won -- include infrastructure construction plans to build a new e-transaction logistics center and megasized shopping complexes in various regions.

He also said that 14 out of 67 state-run funds will be altering their previous operating plans to input 1.6 trillion won into boosting the domestic economy. 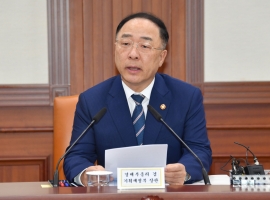 The minister’s announcement came as a follow-up to the government’s earlier vows to expand fiscal spending in a pump-priming gesture. In early July, the government said that it will speed up the injection of supplementary state budget into social overhead capital and employment.

“With the global economic slowdown and uncertainties, along with Japan’s economic retaliations, the downside risks for the Korean economy have grown,” Hong said, explaining the reason of the newly added investment plans.

Kim Yong-beom, first vice minister of finance, added that the country is likely to struggle to achieve its growth target this year, even with the extra fiscal spending along the way.

“The 2.4-2.5 percent (growth) target will not be easy to reach (this year), though we do expect some boosting effect from the latest fiscal execution policies,” Kim said.

“We cannot yet assess the precise impact that (the government’s latest measures) will have, as the outcome will depend on the progress of (budget) execution.”

Earlier this year, the Ministry of Economy and Finance trimmed its outlook for the country’s economic growth rate by 0.2 percentage point to the 2.4-2.5 percent range. The Bank of Korea suggested a lower figure, slashing the figure to 2.2 percent from the previous 2.5 percent.