South Korea's consumer prices remained unchanged in August from a year earlier, staying below the 1 percent threshold for the eighth consecutive month, according to the data from Statistics Korea. 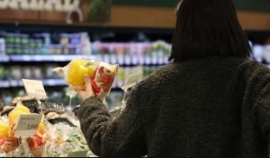 The reading marked the lowest since 1965, when the statistics agency started compiling data on consumer prices.

Lee Doo-won, director at the agency's price statistics division, said the record low consumer prices are blamed on a base effect in prices of agricultural and petroleum products from a year earlier.

From a month earlier, the consumer price index rose 0.2 percent.

Prices of petroleum products fell 6.6 percent in August from a year earlier, while prices of agricultural products declined 11.4 percent, according to the data.