The foreign ministers of South Korea and Japan remained at odds in their bilateral meeting held in China on Wednesday, reiterating their respective stances on Tokyo’s wartime forced labor and trade curbs.

Foreign Minister Kang Kyung-wha and her Japanese counterpart, Taro Kono, met for 35 minutes on the sidelines of a trilateral meeting with their Chinese counterpart, Wang Yi, in Gubei Water Town near the Great Wall in northern Beijing. 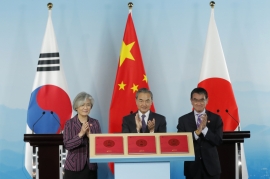 “Kang strongly urged Kono to retract the country’s decision to remove South Korea from its “whitelist” of countries with fast-track trade status under its export controls system.

She also called on the Japanese Foreign Ministry to play a more active role in facilitating talks between the two countries’ authorities involving export restrictions.

Her remarks come as Seoul seeks to mend strained ties with Tokyo through dialogue. Since Japan’s July 1 announcement that it was tightening regulations on the export of three chemicals vital to Korean technology companies, their relations have gone on to deteriorate to their lowest level in years.

Kono said he hoped the Korean government would pay attention to the safety of Japanese people in Korea, while Kang urged his concern for the security of Koreans in Japan amid growing antagonism between the two.

After the meeting, Kang left the venue telling reporters that she had nothing to say.

In a trilateral meeting where the three ministers gathered, Kang stressed that cooperation among the three nations should not be shaken by bilateral relations.

“Enhancement of bilateral relations is expected through cooperation among the three countries by contributing to the consolidation of free trade and peace on the Korean Peninsula,” Kang said.

“The three countries have prospered through multilateral trade (in accordance with) free and fair norms. I expect cooperation based on those (free trade) principles,” Kang said.

At a press conference after the meeting, Kang called on Japan to retract the “unilateral and retaliatory trade measures” and “eliminate uncertainties that have been growing in the region.”

Wang said China would work with the two countries to maintain multilateralism and free trade and was committed to the region’s stability.

Saying there would inevitably be clashes of interests and differences in opinion among the three neighboring countries, he urged South Korea and Japan to proceed in a constructive manner and find solutions through dialogue.

The top diplomats of China and Japan expressed the mutual desire and common goal of stepping up cooperation on the economy and on the denuclearization of North Korea.

“East Asia has a responsibility for global stability and prosperity,” Kono said, noting that the economies of the three countries combined account for over 25 percent of the world’s gross domestic product.