SEJONG -- President Moon Jae-in will pass the halfway point in November, finishing the first 30 months of his 60-month term.

The Moon administration launched in May 2017, several months after a political scandal involving former President Park Geun-hye and her confidante Choi Soon-sil swept the nation and ignited public fury.

The people pinned great hopes on Moon, who stressed justice and fairness in his inaugural speech.

Moon’s approval ratings hovered around 70-80 percent during the first year of his tenure on the back of improved relations with North Korea after the 2018 PyeongChang Winter Olympics and the subsequent inter-Korean summit.

But his popularity started falling in the third quarter of 2018. 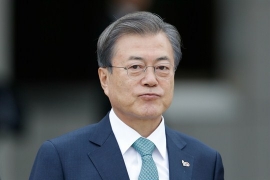 His personnel policy frustrated a great number of people, as he was accused of appointing liberals or Democratic Party members to the Cabinet irrespective of their career backgrounds as civil servants.

Many microbusiness owners, including self-employed individuals, had to close up shop as a result of the huge cost burden the Moon government imposed by implementing drastic minimum wage hikes over the past two years.

Young people, accordingly, faced a shortage of part-time jobs. Further, Moon’s earlier pledge to create as many jobs as possible for people in their 20s has gone unfulfilled amid an economic slowdown.

The people question what was done with the taxpayer money -- about 50 trillion won ($41.3 billion) -- that was supposedly allocated to promote employment.

In November 2016, when the Choi Soon-sil influence-peddling scandal hit the nation, the extended jobless rate -- a figure that reflects underemployment as well as unemployment and is an indicator of the de facto unemployment rate -- stood at 9.8 percent.

But it had climbed more than 2 percentage points to 11.9 percent as of July 2019, according to Statistics Korea.

Since 2015, the government agency has compiled extended (or sentiment-reflected) unemployment rates in a document titled the Supplementary Index III for Employment, an effort to shed a clearer light on unemployment and underemployment trends.

People deemed to be among the “extended jobless” include temporary employees who work fewer than 36 hours a week and want to change jobs, as well as seasonal workers who are out of work for part of the year.

Seoul apartment prices, after a spike that led to an all-time high, have been resilient in the face of the Land Ministry’s anti-speculation measures, despite the ministry’s decision to designate several locations in Gyeonggi Province as new residential areas.

The Moon government’s education policy has embarrassed many students and parents, as it allegedly sought to scrap some of the elite high schools nationwide. Paradoxically, the children of some liberal political heavyweights have graduated from elite schools, including autonomous private high schools and high schools that specialize in teaching foreign languages. 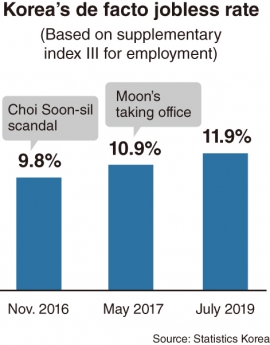 The bearish capital market, alongside the weakness of the won against major key currencies, represents a sagging economy with few signs of a breakthrough in the government’s macroeconomic policies.

While some liberals attributed the lackluster economy to the dispute over tariffs between China and the US or to South Korea’s trade war with Japan, South Korea is one of the few emerging economies whose currency has posted such a sharp drop.

The nation’s exports fell by 9.5 percent on-year during the Jan. 1-Aug. 10 period, which is likely to seriously undermine the 2019 growth of its gross domestic product.

One analyst in Seoul said, “Korea’s GDP ranking is projected to slide from the current 12th and per capita income fall below $30,000 again.”

He also raised the possibility that the nation, which currently stands at No. 6 among the world’s top exporters, might lose its place in the rankings.

Further, Moon’s inter-Korean policies have faced a deadlock amid lingering uncertainty over the North’s intentions regarding the dismantlement of its nuclear facilities.

President Moon and the Democratic Party have lost popularity among people aged 50 and over and among men in their 20s, according to pollsters.