The number of new jobs in South Korea rose to their highest in 18 months in July on the back of a rise in employment in the health care, food and leisure-related sectors, with the jobless rate up slightly to 3.9 percent, government data showed Wednesday.

The number of employed people in Asia's fourth-largest economy came to 27.38 million, up 299,000 from a year earlier, according to the data from Statistics Korea. 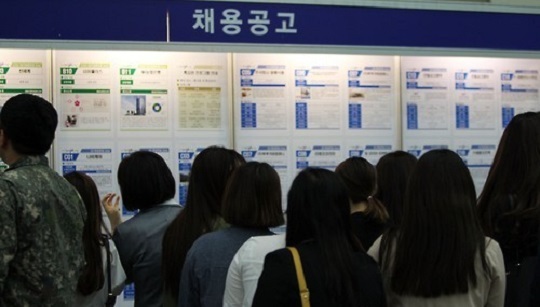 The statistics agency said the number of unemployed people stood at 1.09 million last month, the highest July figure since 1999, when it was 1.47 million.

By industry, the manufacturing sector -- the backbone of South Korea's economy -- suffered a decline in job offerings by losing
94,000 jobs in July, extending its slump to a 16th consecutive month. Jobs in the retail, wholesale and public segments also lost ground.

In contrast, the health and social welfare sectors added 146,000 jobs, and the accommodation and restaurant sector saw an increase of 101,000 jobs last month.

The country's employment rate was 61.5 percent last month, up 0.2 percentage point from a year earlier, with the number of jobless people reaching 1.09 million, up 58,000 over the cited period.

The Moon Jae-in government has been struggling to increase job offerings for young people and senior citizens as the economy loses growth momentum amid falling exports and weak demand.

Exports have been sliding since Dec. last year on a decline in prices of chips, a key export item for South Korea, and a slowdown in China, its top export destination.

Recently, an escalating trade row between the United States and China has begun having an impact on the local economy. (Yonhap)