[Herald Interview] Percussion is more than beats and rhythms

To be a solo percussionist is an unusual career choice, as percussionists are usually a part of a larger team such as an orchestra or band.

But Lee Hyun-gi is carving out a successful career as a solo percussionist based in London, and she plays a variety of instruments -- not just the drums but also the vibraphone and her specialty, the marimba, an instrument featuring a set of wooden bars that the player strikes with a pair of rubber mallets.

“People are unfamiliar with percussion instruments. They doubt … you can fill out a whole program with just the marimba. But after listening to a marimba performance, they are enchanted by the marimba,” Lee told The Korea Herald during an interview held Monday in central Seoul. 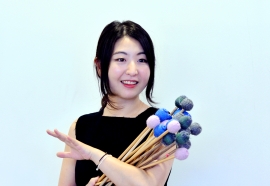 Lee is in Seoul for a month to lead a marimba presentation for students studying percussion instruments, which kicks off Wednesday in a practice room within the Sejong Center. She is to give a lecture on performing as a soloist in London and will also present a repertoire of diverse genres.

The 23-year-old has won first prize at the Seoul University National Competition, the Guildhall and Trinity Hall Marimba Competition and the Fermo International Percussion Competition. She was also recognized at the 2012 BBC Young Musician of the Year Competition for her marimba performance.

Lee started learning to play the marimba at 9 and fell in love with the instrument from the start. She continued to study music when she moved to London, choosing to focus on orchestral percussion at the Royal College of Music.

“You know, there is this prejudice that Asians lack a sense of art. But I had already mastered the techniques when I moved to London at the age of 13. People were surprised at how well I could play, despite the young age. It was all because of practice. Koreans practice eight hours a day,” she said.

“In London, I did not have to practice that much. But in college, I had to learn all kinds of percussion instruments, and that wasn’t easy,” she said. “The learning, however, has allowed me to explore diverse genres of music.” 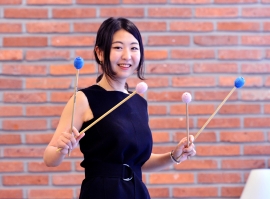 Lee agrees that being in a less spotlighted field of music has its drawbacks.
“Percussions, in a way, are not as competitive as other more popular instruments. The difficulty is that there are not many scores to perform as marimba has had a short history compared to other classical music instruments,” she said.

Aware of the situation, Lee arranges classical music pieces for the marimba, such as Bach’s harpsichord concertos.

Though percussionists are often part of an orchestra, Lee has no immediate plans to join one. She is going solo for now.