Following is the first part in a two-part series on the crisis facing the Moon Jae-in administration -- Ed.

Just over two years into his five-year term, President Moon Jae-in is facing the biggest crisis of his term yet, pressed on all fronts due to the weak economy, domestic politics, ties with North Korea and other diplomatic concerns.

Topping the long list of issues which Moon faces is the escalating tension with Japan. Since he took office, bilateral relations with Tokyo have gradually deteriorated, culminating in its recent trade restrictions.

In July, Japan applied additional restrictions on exporting key semiconductor-related materials to South Korea, and earlier this month removed the country from its whitelist of trusted trade partners that receive preferential treatment in importing more than 1,000 items. 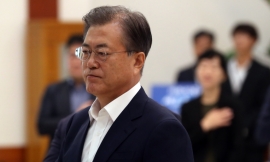 Although Tokyo has cited a number of different reasons, Seoul has taken them to reflect retaliation for the Supreme Court’s decision regarding victims of forced labor, and the ruling Democratic Party has branded its measures as “economic invasion.”

South Korea’s top court sided with those forced to work for Japanese firms during Japan’s colonial rule of the Korean Peninsula, but Tokyo claims that the matter was settled through the Treaty on Basic Relations signed in 1965.

With the reaction of both sides intricately linked to domestic politics, experts say that the situation is likely to linger for some more time.

“If our government backs off, there will be a significant political impact. The (Shinzo) Abe government had hoped to use South Korea to foster its conservative base to push for a constitutional revision, so if Japan backs off now, Abe will face political difficulties,” said National Korea Diplomatic Academy professor Kim Hyun-wook.

Japan’s moves have been widely interpreted as being part of Abe’s plans to revise his country’s pacifist constitution.

However, Kim said that Japan is likely to go slow on its plans due to the domestic economic conditions.

“Regardless, looking at the situation now, the (Seoul-Tokyo) face-off will continue,” Kim said.

Even inter-Korean relations, one aspect that Moon appeared to outshine his predecessors, have soured in recent weeks.

Since May, North Korea has conducted a series of short-range projectile weapons tests, including those for newly developed ballistic missiles.

US President Donald Trump’s unpredictable approach does not appear to have helped matters.

Rather than condemn the tests as serious provocations, as would be expected of a US leader, Trump effectively gave tacit consent, downplaying their significance by referring to them as “very small,” and saying that the weapons are possessed by “almost every country.”

His comments appear to have emboldened Pyongyang.

In a statement released on Sunday, Kwon Jong-kun, director-general of the Department of American Affairs at the North Korean Foreign Ministry, claimed that “the US president has effectively recognized our right to self-defense,” referring to Trump’s comments.

In the statement, Kwon ridiculed Seoul, comparing Cheong Wa Dae to a “scared dog” and referring to Minister of National Defense Jeong Kyeong-doo as “laughable.”

The statement also clearly excluded Seoul from any dialogue involving North Korea, saying all denuclearization talks that take place in the future are “strictly between North Korea and US.”

North Korean leader Kim Jong-un himself has also been quoted as saying that the weapons tests were a warning to the South.

Moon is also facing increased pressure from Trump in the defense cost-sharing negotiations.

Trump has claimed that Seoul has agreed to further raise its share, even as South Korean authorities claim the negotiations have not yet begun. He went further, saying that it is easier to get $1 billion from South Korea than it was to collect rent from his New York properties.

The US president had used similar tactics ahead of renegotiating the Korea-US Free Trade Agreement, announcing on Twitter that Seoul and Washington are negotiating a “new deal” after his first summit with Moon in June 2017. Seoul had also refuted Trump’s comment at the time, but talks to modify the pact soon followed.

According to Shin Yul, a political science professor at Myongji University, several factors are behind the current situation, one of which is the lack of experience of Moon’s diplomatic and national security aides.

“(The aides) don’t have a diplomatic background. So, they have difficulty in resolving bilateral problems,” Shin said. He went on to say that as Moon could have selected those with more experience, he cannot avoid blame for failing in that regard.

North Korea’s weapons tests have raised concerns about gaps in the South’s defense capabilities, with some claiming that Seoul may lack the capabilities to shoot down the missile fired on Saturday.

While the North has only revealed that it is a newly developed weapon, some experts have raised the possibility that the projectile fired on Saturday may be a type of cluster bomb.

The South Korean government, however, refutes doubts about the country’s capabilities, citing the rapid increase in the defense budget since Moon took office.

“(The South) is continuously strengthening its defense capabilities in response to the changing threats,” a high-level Cheong Wa Dae official said on condition of anonymity, citing increases in defense budget as evidence.

According to the official, the defense budget increased at an annual average rate of 8.2 percent under Moon, compared to 4.1 percent and 5.2 percent during the Park Geun-hye and Lee Myung-bak administrations, respectively.

“Of the defense budget, 32.9 percent is for improving defense capabilities, it is the highest since the Defense Acquisition Program Administration was established in 2006,” the official said, adding that Moon has stressed the importance of “peace through strength” on numerous occasions.

In addition to North Korea, China and Russia have also probed the boundaries of Seoul’s defenses, sending warplanes into South Korea’s air defense identification zone and into its sovereign airspace.

According to Shin, the national security issues and other concerns with Japan, to some extent, are due to the South Korea-US alliance.

“The basis (of the issues) is the South Korea-US alliance. China and Russia are looking to alter it. North Korea ridiculing (the South) and Russia’s interest comes from (cracks) in the alliance,” Shin said.

“A party that has the upper hand ridicules its opponents. But (South Korea) is not responding (to North Korean threats) for the sake of denuclearization. If we let things be, it will get worse.”