US President Donald Trump ridiculed South Korea at his reelection campaign fundraiser Friday, saying it was very easy to force Seoul to hike its share of costs for stationing American troops here.

According to the New York Post, Trump referred to how as a boy he used to accompany his father to collect rent, saying: “It was easier to get a billion dollars from South Korea than to get $114.13 from a rent-controlled apartment in Brooklyn, and believe me, those 13 cents were very important.” 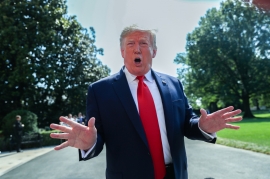 During the 10th round of negotiations on the shared defense costs early this year, Washington suggested that Seoul pay $1 billion, and the two sides finally signed a deal that called for an 8.2 percent increase in South Korea’s share to 1.04 trillion won ($915 million).

Mentioning that South Korea makes great TVs and has a thriving economy, Trump told his supporters at the fundraisers in New York: “So why are we paying for their defense. They’ve got to pay.”

Trump made fun of US allies South Korea, Japan and the European Union -- mimicking Korean and Japanese accents -- and talked about his love of dictators, Kim Jong-un and the current ruler of Saudi Arabia, according to the New York Post.

He mimicked President Moon Jae-in’s accent while describing how he caved in to Trump’s tough negotiations, the daily newspaper said, adding that the US president also put on a fake Japanese accent to recount his conversations with Japanese Prime Minister Shinzo Abe over trade tariffs.

On his friendship with Kim, Trump said: “I just got a beautiful letter from him this week. We are friends. People say he only smiles when he sees me.”

“If I hadn’t been elected president, we would be in a big fat juicy war with North Korea,” Trump was quoted as saying by the New York Post.

Trump also spoke about how fascinated he was with Abe’s father, who had been a kamikaze pilot, and said that when he asked Abe if the suicide pilots were drunk or on drugs, he said, “No, they just loved their country.” According to the New York Post, Trump went on: “Imagine they get in a plane with a half tank of gas and fly into steel ships just for the love of their country!”