[Feature] How far are we from printing hearts for transplant?

Three-dimensional printing of human organs is not some far-fetched fiction. Active research of the relevant technologies has gained pace around the globe, especially here in South Korea, where the academia, industry and government are paying keen attention to the convergence of medicine, mechanical and computer engineering.

For now, Korean technology has come as far as printing skins with cell-encapsulated bioink to replace animal tests.

A firm that stands out in 3D bio printing here is T&R Biofab. Short for tissue engineering and regenerative medicine, bio-fabrication, T&R Biofab was founded in 2013 based on 15 years of research at Pohang University of Science and Technology in Pohang, North Gyeongsang Province.

CEO Yun Won-soo, still an incumbent professor of mechanical engineering at the university, took the academic research and founded T&R Biofab with its headquarters in Siheung and a research lab in Pangyo, Gyeonggi Province.

“The next time you eat pig skin worth 3,000 won ($2.50) at a Korean barbecue restaurant, give a thought to how it could become hundreds of times more valuable bioink when it goes through us,” Yun said with a smile during an interview with The Korea Herald at the Pangyo office. He held up a small vial containing opaque liquid whose label read “deCelluid bioink,” made from porcine bone for research on bone regeneration.


So what is bioink? 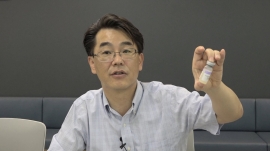 A 3D-printed medical device is produced based on models of 2D CT and MRI scans. The materials used to print medical devices are biocompatible polycaprolactone (PCL) or silicon.

The same production sequence is applied to 3D bioprinting, only that the material used is called bioink that is comprised of living organisms.

While T&R Biofab underlines its company value in that every step of its 3D bioprinting -- the printer, the software, the bioink -- is self-developed technology, its bioink is at the epicenter of the company’s vision.

Bioink is a combination of living cells and a compatible base, such as collagen, gelatin and hyaluronan.

The company claims to have overcome previous hurdles of bio printing, namely the evaporation of moisture in cells in the printing process, through its own bioink and 3D bio printer that stalls cells from drying.

It had taken T&R Biofab five years to develop its bioink for skin, bones and cartilages and commercialize them in May 2017. Currently, the 3D printed organoids can be used for potential human implants or in laboratories to replace animal tests.

Last year, T&R Biofab signed a global distribution deal for its bioink with an overseas biopharmaceutical firm. The company expects to be able to start supplies later this year. T&R biofab also has a material transfer agreement with a global cosmetics firm, for skin bioink.

T&R Biofab has at least 83 patents in Korea for 3D bioprinting. It has received 8.4 billion won from the government for research support since founding the company. For example, the company is leading the Industry Ministry’s 3.6 billion won project to develop bioink for artificial vessels by end-2021.

“Three-dimensional bioprinting living organs and directly transplanting that to critically ill patients is something that will be eventually done. Our goal is to become the first in the world to do so,” Yun said. 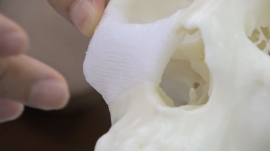 Printing skin, bones or cartilages, requires separate bioink, and the end product must be individually approved by the Ministry of Food and Drug Safety. This is time-consuming and costs a lot.

As a result, even as the company revs up its bioink development, it is also developing and commercializing medical device 3D printing.

The company commercialized TnR Mesh in 2014, which is porous biodegradable polymer structure that can be infused with stem cells to expedite bone regeneration. The patient-specific implant would temporarily replace a missing bone, but melt away in time to give way to the patient’s own regenerated bone, according to the firm.

At the moment, T&R Biofab has 11 medical device approvals from Ministry of Food and Drug Safety for its biodegradable scaffolds. An estimated 150 doctors at 110 hospitals in Korea have experience using T&R Biofab’s 3D printed scaffold.

The scaffolds are also available in Vietnam and Thailand. Yun hopes to get approval to export to Philippines this year.

The company is seeking to start clinical trials and pharmaceutical approvals for bio-printed cardiac patches, cartilages and vessels.

One of the patents Yun is proud of is the ability to print capillary vessels for liver models, whose structural minuteness is comparable to a few strands of human hair and requires precise positioning of two types of cell.

“We’re the only ones in the world who have this technology,” Yun said.


The area of 3D printing that is now impacting medical practices in Korea is 3D printed models of organs with which doctors can practice and train prior to difficult surgeries where patient life depends on the operation.

Medical IP, a firm whose business model is in the deep-learning, artificial intelligence software that turns 2D MRI and CT scans almost instantly into 3D printing models, is another player in the market that deserves attention. The company is a spin-off from a Seoul National University Hospital research project where CEO Park Sang-joon is a professor. 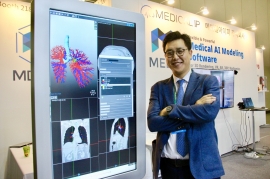 “Pundits may say our technology and that of T&R Biofab complement each other,” said Park.

Park is a computer engineer who devised a deep-learning AI software that allows better diagnostic imaging with Nvidia’s GPU. When other firms take five days to 3D model a vessel in a software, Medical IP’s Medip software can produce models of any organs in real time, Park said.

Imagine a transparent pair of silicon lungs with a splash of hot pink cancer cells. Seeing the target clearly, doctors can plan their surgeries and decide which parts to cut off to minimize the impact for speedy patient recovery. Explaining the operation to a patient and gathering their consent becomes easier. The technology is also applicable when training surgeons. 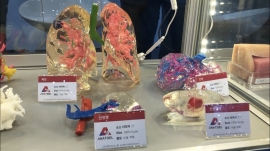 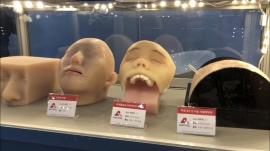 “Deciphering the 2D scans of an organ poses headaches for unseasoned surgeons,” Park said. “Unlike how patients imagine or hope doctors to be all-knowing, diagnostic radiology is an area that requires further expertise.”

Having the flat images translated to the 3D form greatly enhances the precision of treatment.

Medical IP has a business entity in Xi’an, China, and plans to expand to Silicon Valley in the US. There are Medical IP offices in Busan and Chuncheon in Korea and Singapore.

Park plans on taking the company public in Korea by end-2020 with Daishin Securities as underwriter.


Making rules as they go


National Institute of Food and Drug Safety Evaluation observed in 2018 that 3D printing is ideal for the medical industry, as medical devices, by nature, are produced in various forms and in small quantities.

In the face of growing technology, authorities are devising guidelines as the developments unfold in order to ensure consumer safety and simultaneously foster industrial growth.

There are currently four government-written guidelines for medical device 3D printing companies may follow which includes dental implant, scaffold for skin regeneration, biodegradable scaffold’s safety and efficacy test guideline. These guidelines remain as recommendations and can be subject to modification when it’s later written into law.