Jeon Gwang-hoon, a pastor and the chief of the Christian Council of Korea, on Wednesday faced public backlash and opposition from Christian groups for frivolous claims concerning President Moon Jae-in.

During a press conference earlier in the week, Jeon, who has been calling on the president to step down, said, “At this rate South Korea will fall. I thought I had to save the country before it perishes. … President Moon should leave Cheong Wa Dae by the end of this year.”

Stepping up his rhetoric against the president, Jeon claimed the president should either step down or change places with former President Park Geun-hye, who is currently in prison. 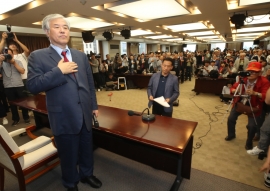 Jeon Gwang-hoon, a pastor and the chief of the Christian Council of Korea, recites the Pledge of Allegiance at a press conference held to call on President Moon Jae-in to step down earlier this week in central Seoul. (Yonhap)

Jeon argues that he is speaking on behalf of pastors, but the Christian Council of Korea represents 14,640 churches, or 17.5 percent, out of 83,883 churches nationwide, according to figures from the Ministry of Culture, Sports and Tourism.

The pastor’s inflammatory comments sparked backlash within the Christian community.

Prior to the conference the National Council of Churches in Korea had released a statement urging Jeon to stop making political moves and to “stop bringing disgrace to the gospel of Jesus Christ.”

This was in response to a post Jeon had made on the Christian Council of Korea’s website last weekend seemingly aimed at taking a swipe at President Moon.

“Moon Jae-in is forcing North Korea’s communist ideology on the country and citizens,” the post said.

A slew of Christian groups, such as a group for church reform, have also issued similar statements asking Jeon to resign and the leadership to apologize for stirring chaos and politicizing Christianity.

“Pastor Jeon Gwang-hoon, who has been making political moves using his position as a pastor, said Liberty Korea Party Chairman Hwang Kyo-ahn (would) suggest him (for) a ministerial post if he (Hwang Kyo-ahn) becomes president. This should be looked into and if it turns out to be false he should be arrested for spreading false information,” said Oh Cheon-do, the chief of the civic group the Alliance for Patriotic Koreans.

After the chaotic press conference, Jeon and his supporters moved to Cheong Wa Dae, where they are taking turns to stage a single-person demonstration calling for the president to step down.