Recalling the first historic summit between leaders of the US and North Korea a year ago, Unification Minister Kim Yeon-chul said Wednesday that the government sees this month as a critical period in making progress in the denuclearization of the Korean Peninsula.

“Today is the first anniversary of the historic Singapore summit … the second US-North Korea summit was held in Hanoi in late February, and we are expecting the third one to come soon,” Kim said during a meeting between the Democratic Party and the government at the National Assembly on Wednesday. 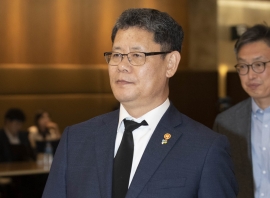 Kim pledged to work closely with the parliament to seek “wise solutions” at this “very important time” for denuclearization negotiations, which have remained at a standstill since the failure of the summit between Donald Trump and Kim Jong-un in Hanoi in February.

First Vice Foreign Minister Cho Sei-young, who attended Wednesday’s meeting, said the ministry will seek to create a breakthrough in bilateral relations between Washington and Pyongyang as well as inter-Korean relations, by capitalizing on diplomatic events to be held at the end of this month.

Following the G-20 Summit in Osaka, Japan, from June 28-29, Trump and US Secretary of State Mike Pompeo will visit South Korea to coordinate “the final, fully verified denuclearization of North Korea” with President Moon Jae-in. The date of their visit has not been publicly disclosed yet.

The unification minister told lawmakers that the government is pushing forward with sending food aid to the North pre-emptively, to help the country that is suffering from food scarcity brought on by drought and floods.

“The government will pursue humanitarian aid in accordance with humanitarian principles regardless of the political situation,” he said.

Seoul is considering providing rice to Pyongyang, likely via an international organization, in addition to $8 million in aid to North Korea through UN agencies.