Politicians on both sides of the aisle came together Tuesday to mourn the passing of Lee Hee-ho.


Lee, a women’s rights and pro-democracy activist, first lady and aide to Kim Dae-jung, died at 11:37 p.m. Monday at Severance Hospital in western Seoul. She was 96.

Starting Tuesday morning, visitors filled the funeral hall to offer their condolences. The corridor leading to the memorial parlor was lined with bouquets of white flowers and ribbons from National Assembly members, mayors, governors of cities and provinces all over the country. 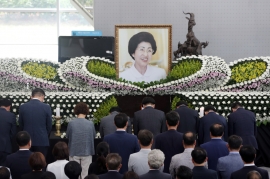 Gwangju councilors and city officials pay tribute to the late first lady Lee Hee-ho at a memorial altar in Gwangju on Tuesday. (Yonhap)

While condolence visits were scheduled to officially commence at 2 p.m., politicians of all leanings began to arrive early in the morning, and partisanship seemed to pause briefly as they paid tribute to the former first lady.

Rep. Sul Hoon of the ruling Democratic Party of Korea and Rep. Choi Kyung-hwan of the minor opposition Party for Democracy and Peace arrived at around 8:50 a.m. Choi, who served as presidential secretary to Kim from 2002 to 2003, said Lee’s passing did not feel real to him until he saw her portrait at the altar.

Minor opposition Bareunmirae Party Chairman Sohn Hak-kyu came to offer his condolences at 10:30 a.m. “Another page has turned in Korea’s history,” he said. “First lady Lee Hee-ho played a pivotal role in many of President Kim’s achievements -- including the Nobel Peace Prize.”

Party for Democracy and Peace Chairman Chung Dong-young, who paid a visit at around noon, said Lee holds “an adamant presence” in Korea’s modern history for her “unwavering fight for the country’s democracy alongside President Kim.”

Prime Minister Lee Nak-yon said it was “a blessing for Korea that a person like Lee Hee-ho was by the side of the president during times of struggle for democracy” during his visit in the afternoon.

The former first lady’s last words were disclosed to the press at an 11 a.m. conference by Kim Sung-jae, the director at the Kim Dae-jung Peace Center, an eponymous nonprofit organization established by President Kim for the advancement of human rights and democracy.

According to the center’s director, Lee expressed two things in her will: her gratitude for all the love that she and her husband have received from the Korean people and her wish to turn the presidential couple’s home in Donggyo-dong, Seoul, into a place of commemoration for Kim’s legacy.

A slew of citizens also attended the wake, which is open to the public. One of them was Park So-won, 30, who said she came to offer her condolences “out of respect for all that the former first lady has done for women’s rights and democratization of the country.”

Lee will be laid to rest at Seoul National Cemetery on Friday. 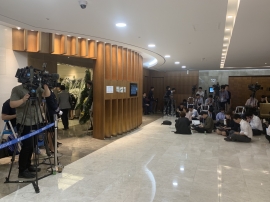 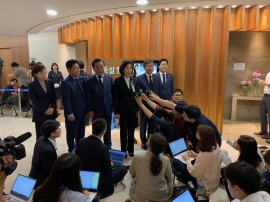