Jeju police said Tuesday they will refer a murder case involving a 36-year-old woman to the prosecution on charges of killing her ex-husband and dismembering and abandoning his corpse.

Police believe Koh Yu-jeong intentionally killed the victim, whom police only identified as a 36-year-old man surnamed Kang, and had set up a plan for the murder in advance. 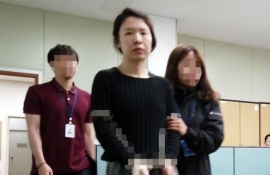 This contradicts Koh’s claim that she tried to defend herself from Kang’s sexual assault.

Koh killed Kang with a knife at a rental accommodation on Jeju Island on May 25 and disposed of his body in the sea en route to Wando, an island off the coast of South Jeolla Province, and near an apartment in Gimpo, Gyeonggi Province.

Police said evidence indicated that the crime was premeditated, given that she bought Zolpidem -- also known as Ambien and used to treat insomnia -- before she headed to Jeju Island, purchased tools used in the crime on the island and attempted to destroy evidence by putting the body parts into plastic bags and throwing them into the sea and a garbage bin.