[Feature] ‘Contributing to South Korean society in the way we can’

PAJU, Gyeonggi Province -- Crossing armed borders alone to flee a poverty-stricken life in North Korea was one of the biggest challenges 29-year-old Lee Kang has faced. Starting life over in South Korea, entirely different from his former home, was another.

In the beginning, everything was surreal, as if he were living in two different worlds. He would be in South Korea when awake, but he would return to the North in his dreams at night, Lee told The Korea Herald. 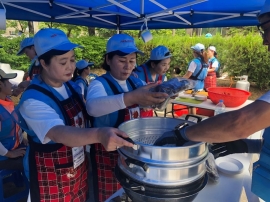 But thanks to the help he received from people here, he has settled in. To return the kindness he received, he created the Seoul Aram Volunteer Group, made up of defectors attending university, in March last year.

“The support system (for defectors) is well-established, and I received help entering college. With the volunteer group, we wish to contribute to Korean society in the way we can,” Lee said while taking pictures of elderly as part of volunteer work in Paju, Gyeonggi Province, on Saturday.

Across South Korea, there are about 30 to 50 volunteer groups consisting mainly of North Korean defectors, according to the Korea Hana Foundation, a public institute established under the Ministry of Unification.

To encourage and support defector groups, the foundation has run the Chakan Volunteer Union since 2017. It annually selects 10 volunteer groups made up of defectors, provides funds and plans volunteer activities for them. 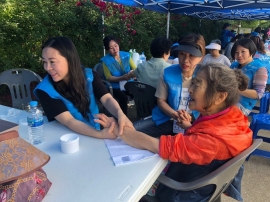 Contributing in the way we can

From early in the morning, an area within an apartment complex in Paju was bustling with people setting up tables and booths for an event that brought together 50 members of the Chakan Volunteer Union and 50 others from civic volunteer groups.

Held for the first time for this year’s volunteer union members, the joint event was part of the foundation’s program for defectors and South Korean volunteers to exchange experiences and forge ties.

The volunteers were busy preparing a small festival, where North Korean food would be offered and songs familiar to the two Koreas performed for seniors who live alone and the neighborhood’s residents.

Under blue tents, booths were set up for 5-minute hand massage, nail care and face painting -- skills that defectors had acquired in the South. 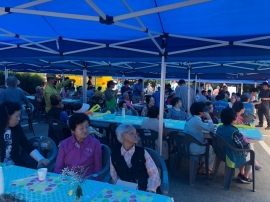 “Volunteering has brought warmth to my life. When I meet the eldery, I think of my parents,” said Kim Dae-ryun as she massaged the hand of an elderly person.

Kim came to the South by crossing the Duman River on the North Korea-China border with her two children. She arrived here in 2008 and started doing volunteer work five years ago by joining the Unification Hanul Group in Incheon.

“Doing this work is not easy while raising three children. But I wanted to give back what I received. I don’t have money, at least I can donate my efforts.”

Meanwhile, young student volunteers from the Aram Volunteer Group and Sunshine Volunteers from Seoul National University worked together to take pictures of elderly participants and print the photos on the spot.

In one corner of the venue, volunteers were busy making North Korean food that would be served to 350 people that day. On the menu were Pyongyang-style cold noodles, artificial meat rice made of beans, North Korean-style corn rice cake and sundae, or blood sausage. 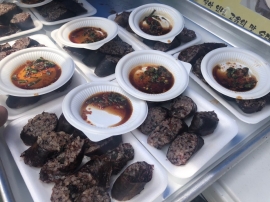 “I have never had artificial meat rice and this style of rice cake in my life. They are great. It is sad that some people died without getting to taste these (North Korean) food,” Cha Young-jin, 72, said.

Although the 1950-53 Korean War has separated the two Koreas for almost all his life, he was sympathetic toward those in the North.

“I recently went on a trip to Dalian, China, to visit Baekdusan. Greenery filled the China side, but it was hard to find a single tree on the North Korean side,” Cha said.

“Because it is our land, I wanted to visit it once in my lifetime. (North Koreans) are our compatriots and we should engage with them.”

When Imjin River Arts Center -- a performance group made up of North Korean defectors -- staged an hourlong concert, everyone sang-along to well-known tunes shared by the two Koreas. 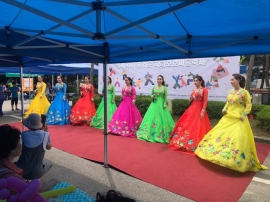 “In this village, there are 1,000 households and 300 of them are North Korean defectors,” Ko Kyung-bin, president of the Korea Hana Foundation, said as the event was nearing its end.

“Blending in well and living together, like today, is what unification is. Whether you were born in the North or in the South, we are neighbors.”

The awkward atmosphere at the beginning of the event had dissipated, and chatter and laughter filled the air as volunteers with different backgrounds sat together for a late meal.

While there are about 33,000 North Korean defectors in the South, they are usually seen only on TV programs like “Moranbong Club” and “South Korean Men and North Korean Women,” residents and volunteers said.

“It is not easy to encounter people who came from the North in daily life, and I thought they were people I would just see on TV,” Kim Seung-do, who came from Ansan, Gyeonggi Province, to volunteer with his daughter, told The Korea Herald. “But I realize they are not so different from us.”

Kim added that he would like to have more opportunities to learn about their life stories. 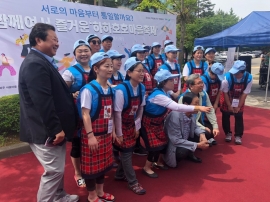 “People are often misled into thinking that volunteer work should be done for the handicapped, or in sanatoriums,” Kim Bo-yeon, the head of Volunteer World-Human Plus, a nongovernmental organization that operates the Korean Hana Foundation’s Chakan Volunteer Group, told The Korea Herald.

Defector groups often start with limited activities, such as providing North Korean food or presenting their culture, which makes it difficult to maintain the group for long.

“Volunteer work varies, and it is important to find out the needs of the people in the area for more fruitful work,” Kim said.

For instance, in Yeosu, where there are many walking trails for tourists, the volunteer group there cleans the trails and provides advice on improving the walking environment.

Defector groups also play a role in bringing defectors out of isolation to mingle with more people, Kim said.

“The ultimate goal is to have North Korean defectors and South Koreans blend in with each other’s communities and build trust. In the end, we are all Korean people.”