The Korea Herald is publishing a series of articles and videos about some of the most expensive and fascinating landmark office buildings in Seoul. -- Ed.


The real estate market for office buildings, which involves multibillion-won units even for average transactions, tends to be defined by lump-sum landmark deals. Investor attention is usually fixed on the most expensive item on the market, the tallest building in the city or country, or the most commercially active complex.

But when the seller or buyer is an up-and-coming player in the corresponding sector, even a relatively small deal may send out a significant signal to the market, regardless of the amount.

The headquarters of NH Investment & Securities, located in the financial district of Yeouido, is a 20-story building with 45,499 square meters in gross area.

(Video shot and edited by Lim Jeong-yeo /The Korea Herald)

Compared to its neighboring brokerage buildings and especially to the nearby landmark International Finance Centre Seoul, the NH building seems modest in size and ordinary in appearance.

What imparts meaning into this asset is its owner, or to be precise, its soon-to-be former owner, NH Investment and Securities.

Likely to be the new owner of this building is Mastern Asset Management which was in May named the preferred bidder at 250 billion won ($212 million). The bidding process was overseen by commercial real estate agency Savills Korea.

Even after the transaction, however, NHIS will continue to occupy its current working space as tenant until it moves into Parc One, a complex to be completed in the vicinity in late 2020. Afterward, Mastern will set to refitting the entire building, possibly turning it into a block of studio flats or business hotel, with details of the plan yet to be decided.

What caught the keen attention of market observers was that NHIS decided to dispose of its longtime head office for liquidity, while actively expanding investments on other landmark buildings across Seoul.

Some saw the decision as a preliminary step for NHIS to purchase another premium headquarters in the upcoming years and to upgrade its real estate portfolio.

The NH affiliate, currently the country’s second-largest brokerage in net profit and equity as of the first quarter this year, has increasingly been making its presence felt as real estate investor under the lead of CEO Jeong Young-chae.

In March, it acquired Seoul Square, the massive landmark office building across from Seoul Station, for 980 billion won, as well as Samsung SDS Tower in Jamsil, eastern Seoul, for 8 billion won.

The company also stretched its building investment business to the overseas market, recently clinching a 250 million-euro ($282 million) joint deal with another South Korean investment company to acquire Edge Amsterdam West, an office building under redevelopment in the Netherlands.

Backed by such active portfolio diversification, the company achieved a record-high net profit of 171.6 billion won in the first quarter this year, up 33.7 percent from a year earlier. Its capital assets reached 54.2 trillion won, ranking second in the industry.

The expansive investment trend, however, also placed some liquidity burden upon the securities firm, which is seen as partly explaining the latest disposal of its old headquarters. 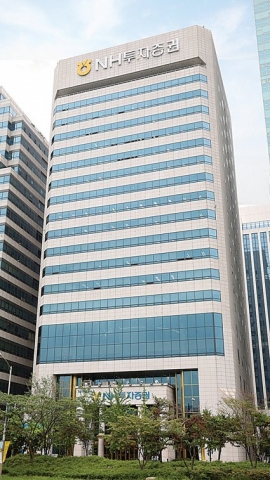 On the purchaser’s side, the corresponding deal also implies the market trend to redevelop aging office buildings into residential space to alleviate the supply-demand imbalance in the urban area.

Despite the existence of some premium hotels and high-end residences in Yeouido, observers pointed out that the affluent financial office district has room for more residential or lodging space, suggesting that Mastern’s upcoming remodeling plan and leasing business may be profitable.

The key point is whether the developer will be able to obtain the necessary administrative approval to change the purpose of the building.