With long, graceful silver hair, she is a model in every aspect, and the epitome of what’s been called a fashion “graynaissance”: the rise of gray-haired models to the forefront of fashion.

Choi Soon-hwa may be Korea’s Johnson.

“I wanted to become a model in my 20s,” Choi said in an interview with The Korea Herald.

“After seeing a silver model on a TV talk show, I signed up for a modeling class right away. I was 72 then,” she said, recalling how her career moved from caregiver to fashion model about five years ago. 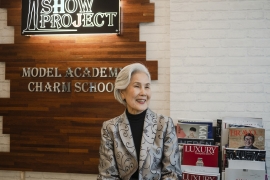 Throughout the interview, held after a catwalk class in southern Seoul, she exuded the beauty of a graceful, aged woman. At 170 centimeters tall, she looked impossibly elegant in a silky, charcoal-colored suit. Her hair, close to pure white, created a halo around her face.

Going gray was a bold decision to make her stand out. In Korea, it is common for people to continue to dye their hair black to look younger, even well past the age of 70.

“I thought there needed to be something unique about me. So I stopped dyeing,” she said.

“It is much more comfortable. Constantly dying my hair, my eyes were always dry, requiring eye drops six times a day. But now I am perfectly fine,” she said as she brushed her thick, abundant hair. 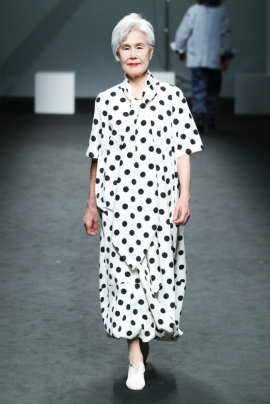 Choi struts down the runway during fashion label The Gang’s show at the 2019 spring-summer Seoul Fashion Week in October 2018. (Seoul Design Foundation)

Walking the runway of Seoul Fashion Week side-by-side young models was something she never even dreamed of. But now she seems to be enjoying every aspect of its effect on her career.

“Seoul Fashion Week is so big. I never imagined I would be a part of something like that. I was nervous, but also really excited.”

“When I told my family two years ago about me modeling, my son said, ‘It’s great that you have a hobby.’ But actually, it’s more than just a hobby now. I am popular,” she laughed.

Choi revealed, however, there are still some limitations to working as a professional model. Compared to the high level of media interest, it remains difficult for senior models to become engaged in professional jobs related to fashion labels.

“Designers prefer young models,” she said. “I hope designers can appreciate the beauty of aged people and put them on the catwalk, showing that aging can be a beautiful process.”

With high hopes for the future, Choi attends a catwalk lesson every Tuesday. At the academy, she attends the top class of five levels for senior model trainees, which only those over 50 can sign up for.

Jung Young-joo, who teaches Choi and other senior models how to walk the runway, says there is not much difference between senior models and their younger counterparts.

“They are doing what they love,” he said.

“The only difference is that in the beginning, seniors may not be so quick to understand directions. But after a while, they eventually get used to the classes. And perhaps the only difference between the two groups is that the senior trainees never miss a class.”