[Herald Interview] 'Robots can not replace human workforce, at least not now'

That is a question constantly raised with the advancement of new technologies that make robots smarter and more autonomous.

That is, however, “undue concern,” says the chief of South Korea’s state-run robot institute, who has been in the industry for more than 30 years.

KIRIA was set up in 2010 under the Ministry of Trade, Industry and Energy based on the Intelligent Robot Development and Distribution Promotion Act.

To truly replace humans like we see in sci-fi movies, robots must be developed to the extent that they have eyes and hands as sophisticated as humans, according to the robot guru.

“Look at our eyes. They can see in any circumstances -- whether in the day or at night and on a foggy day or in light. Their hands are so delicate that they can pick and move the tiniest parts or materials,” Moon said.

He said it would take way more than 50 years to see such development of robotics technologies. 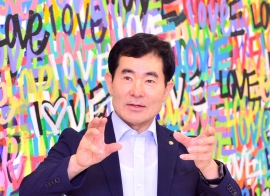 “In the meantime, the robots will help, not replace, human workers do difficult, dirty and dangerous jobs.”

He cited some examples in the areas of logistics, manufacturing and nursing.

American tech firm Amazon has over 50,000 robots in its warehouses. They scurry around and carry heavy shelves to humans for selection.

Robots are also indispensable to assembly lines for small and medium-sized companies struggling to hire workers who shun the poor environment where they endure high temperatures and fire hazards.

In the nursing sector, small Korean robot firm Curaco has developed a personal toilet, called Carebidet, for bedridden patients. The automatic toilet system senses soiled diapers and cleans them without the presence of caregivers.

Some data even suggest that robots have created new jobs over the last few decades.

The adoption of robots created more than 10 million new jobs from 1993 to 2007 in 27 European nations, according to the latest report released by the International Federation of Robotics. In Korea, every 1 billion won ($844,000) of investment in the manufacturing sector has generated 18 new jobs, according to KIRIA. 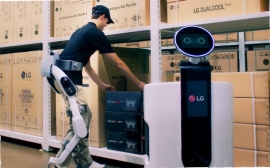 
Despite being a tech powerhouse in many areas, including smartphones, display and chips, Korea has not taken the lead in robotics industry.

In 2017, the sales volume of Korean industrial robots stood at $1.1 billion, coming in fifth globally following China, the US, Germany and Japan, according to the latest data released by the IFR. Global sales clocked $16.7 billion during the period.

“Since most large companies -- including Samsung, LG and Daewoo -- pulled out of their robotics business during the 1997 Asian financial crisis, they have been reluctant to reinvest in the areas. Robotics is not a very lucrative sector,” he said.

Unlike some advanced nations in robotics, Korean enterprises tend to invest in technologies that could bring profits in the short term. This has made the nation relatively weak in material technologies and precision engineering in not only robotics but all tech areas, he said.

“Recently, however, large companies are starting to bet on robotics. They appear to think the market has become big enough,” he said.

Companies, such as Hyundai Robotics, Hanwha Precision Machinery and Doosan Robotics, are gearing up for cobots -- collaborative robots -- which are normally used in manufacturing. They are robots intended to physically interact with humans in a shared workspace.

The president is optimistic about the outlook for Korean companies developing cobots.

“Globally, the development of cobots is still in the growth stage. Korean companies have the potential to lead the market as they all started out together,” he said.

KIRIA is also helping them by joining the process of developing international standards with the US, Germany and Japan. It is also signing cooperative agreements with other nations so that once they gain approval here, further approvals from other nations won’t be necessary.

“As for Samsung and LG, they have started to adopt robotics technologies in their home appliances -- cleaners, steam clothing care system Styler, and air purifiers,” he said.

They have reasons to invest because household robots are expected to grow by more than 10 percent over the next five years, according to industry data.

In the food sector, Woowa Brothers -- which operates Baedal Minjok delivery app -- is also slated to commercialize its robot Dilly within three years. 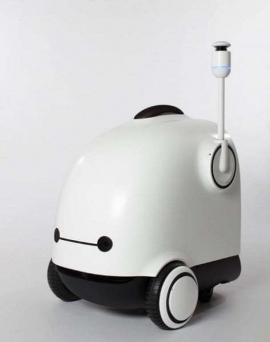 
Moon joined as a head of the robot institute in January last year after serving as a leading researcher at Daegu Gyeongbuk Institute of Science & Technology and professor at Hoseo University in the robotics field at both organizations. He started his career in 1986 at LG Industrial Systems, which was later changed to LSIS, in developing manufacturing robots.

Because the robotics industry is in the growth stage in Korea, KIRIA has much to do to boost the industry, he said.

“We aim to grow a star robotics company like we easily see in other industries -- Samsung, LG, Naver and Kakao,” he said.

In order to do that, it is important to create an ecosystem where startups and small companies can grow without obstacles.

Since taking office, he has been busy renewing the Intelligent Robot Development and Distribution Promotion Act.

“I spent most of my energy to meet and persuade companies, academics and lawmakers to pass the law,” he recalled.

His efforts paid off and the act was passed in May last year, to be extended by another 10 years until 2028.

The institute is also pushing ahead with a five-year intelligent robot basic plan, which should be newly mapped out this year. It hosted a forum in December last year to invite around 300 robot specialists to hear more opinions on the plan.

Beginning this year, KIRIA will also form a robot fund of around 20 billion won to help robotics startups and will run financial programs that lend money to SMEs at low interest rates.

Last month, the Moon Jae-in administration set a goal of turning the nation’s robotics industry into the fourth-largest player in the world by 2023 with the aim of fostering 20 companies.

“I have no doubt we will achieve the goal because we have business ideas, talent and technologies.”