[News Focus] No pension at 65? Will payouts be delayed as Korea’s population ages?

SEJONG -- It has been 31 years since South Korea introduced the national pension, and 20 years since it became a universal program in April 1999.

The number of policyholders for government-administered annuity products offered by the National Pension Service now comes to more than 22 million. 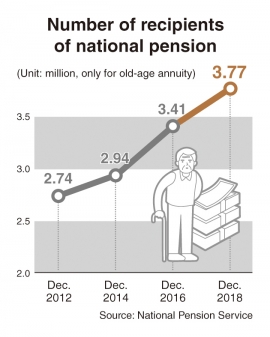 Among those policyholders, subscribers paying into the state pension via their workplaces in the form of mandatory deductions accounted for the dominant proportion, or 62.3 percent. Their numbers totaled 13.77 million as of January 2019.

Subscribers in their 50s outnumbered those in other age brackets at 28.3 percent, followed by those in their 40s at 27.5 percent. Men outnumbered women at 55.4 percent, while those whose monthly income ranged between 1 million won ($840) and 2 million won were also in the majority with 30.6 percent.

As of early this year, the number of pension recipients reached 3.72 million nationwide. These were people in their 60s or older who had paid premiums for at least 10 years. The figure, which was just 2.74 million at the end of 2012, represented a surge of nearly 1 million individuals in six years.

The pension operator revealed that the oldest current pensioner is 91 -- speaking only of the old-age annuity, not the survivor’s annuity or the disability annuity also offered by the National Pension Service.

And the largest cumulative payout to any one citizen so far has been 172.6 million won.

The highest monthly payments are being paid to a senior residing in Seoul, who gets 2.07 million won every month.

This information comes from the pension operator -- headquartered in Jeonju, North Jeolla Province -- and is visible on its homepage. While the pension operator is eager to inform the public of the positive aspects of the program, it is hesitant to publicize the risks that the fund could be depleted in a few decades.

Policyholders are required to pay premiums for a minimum of 10 years to receive payments from the government agency when they turn 60 or 65, depending on when they were born.

Under the current rules, subscribers born in 1952 or earlier can begin collecting pension payments at 60. But those born in 1969 or later have to wait until they turn 65, even if they have paid into the system for 10 years.

Though it is possible to apply for early benefits, applicants must be retirees with no source of income.

Furthermore, many people in online communities speculate that the government is quietly seeking to push the age forward again -- this time making subscribers wait until they are 65-70 before they can collect pension payments.

They cite the rapidly growing percentage of elderly people in the country. “(Senior officials from) the Ministry of Health and Welfare have stressed the need to (gradually) raise the senior citizen age from the current 65 to 70,” one commenter said.

According to the Ministry of Interior and Safety, the proportion of the population aged 65 or over exceeded the 15 percent mark -- 15.05 percent, or 7.8 million individuals -- for the first time in history in May 2019.

Ten years ago, in May 2009, elderly people made up 10.41 percent of the total population with 5.1 million individuals. 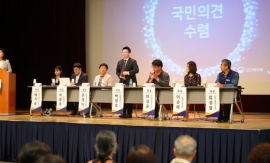 Panelists attend a public hearing hosted by the Ministry of Health and Welfare in Daegu on Oct. 5, 2018, to discuss ways to improve the national pension system. (Welfare Ministry)

Another commenter said, “While some government officials have said there is a need to raise the retirement age, this may accompany a push for the postponement of the annuity-payment age ceiling.”

An analyst in Seoul expressed skepticism about the prospects of a higher retirement age, saying businesses would not welcome such a move given that they actively introduced the voluntary redundancy program and the wage peak system in efforts to save on labor costs.

Market insiders say the gloomy outlook, prompting worries that the system might face depletion by the 2060s, lies in the growing number of recipients and the falling number of policyholders.