On a breezy Saturday afternoon, tens of thousands of people paraded through central Seoul in Korea’s biggest pride parade ever in a call for equal rights for sexual minorities, despite vocal opposition from conservative protesters. 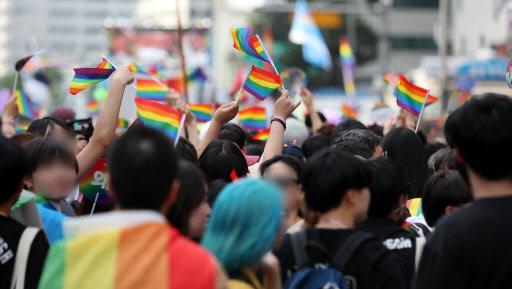 (Yonhap)
Seoul City Square was filled with an estimated 80,000 lesbian, gay, bisexual and transgender people and their supporters, who came to attend the 20th annual pride parade in a country where sexual minorities still live on the fringes of society.

“As part of sexual minorities, I have felt isolated, detained and excluded. I even suffered from depression,” said Shin Seung-ju, a 27-year-old student who has attended the pride parade since 2015. “But when I am here, I feel liberated.”

“I thought I was different from others. But the differences make us who we are. I feel good that we can be what we are,” said Shin, who campaigns for the rights of transgender people. 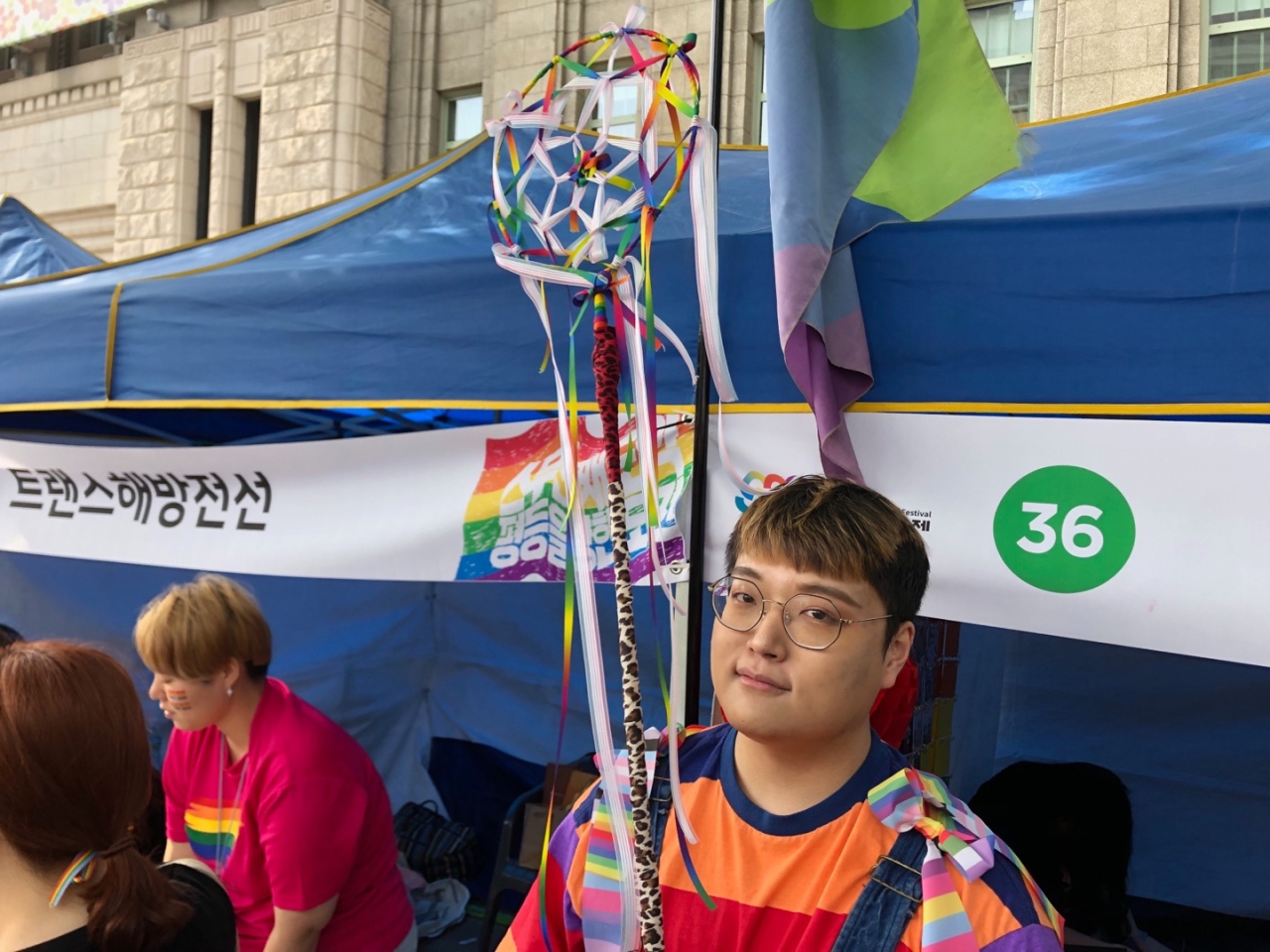 Shin Seung-ju (Ock Hyun-ju/The Korea Herald)
Homosexuality is not a crime in Korea, but there are also no laws banning discrimination, and the majority of Koreans remain intolerant conceptually. Many believe it is a sin, or a condition that can be cured.

The pride parade -- which in its inaugural year in 2000 attracted some 50 people -- has grown enormously in size, with last year’s parade drawing some 60,000 people. 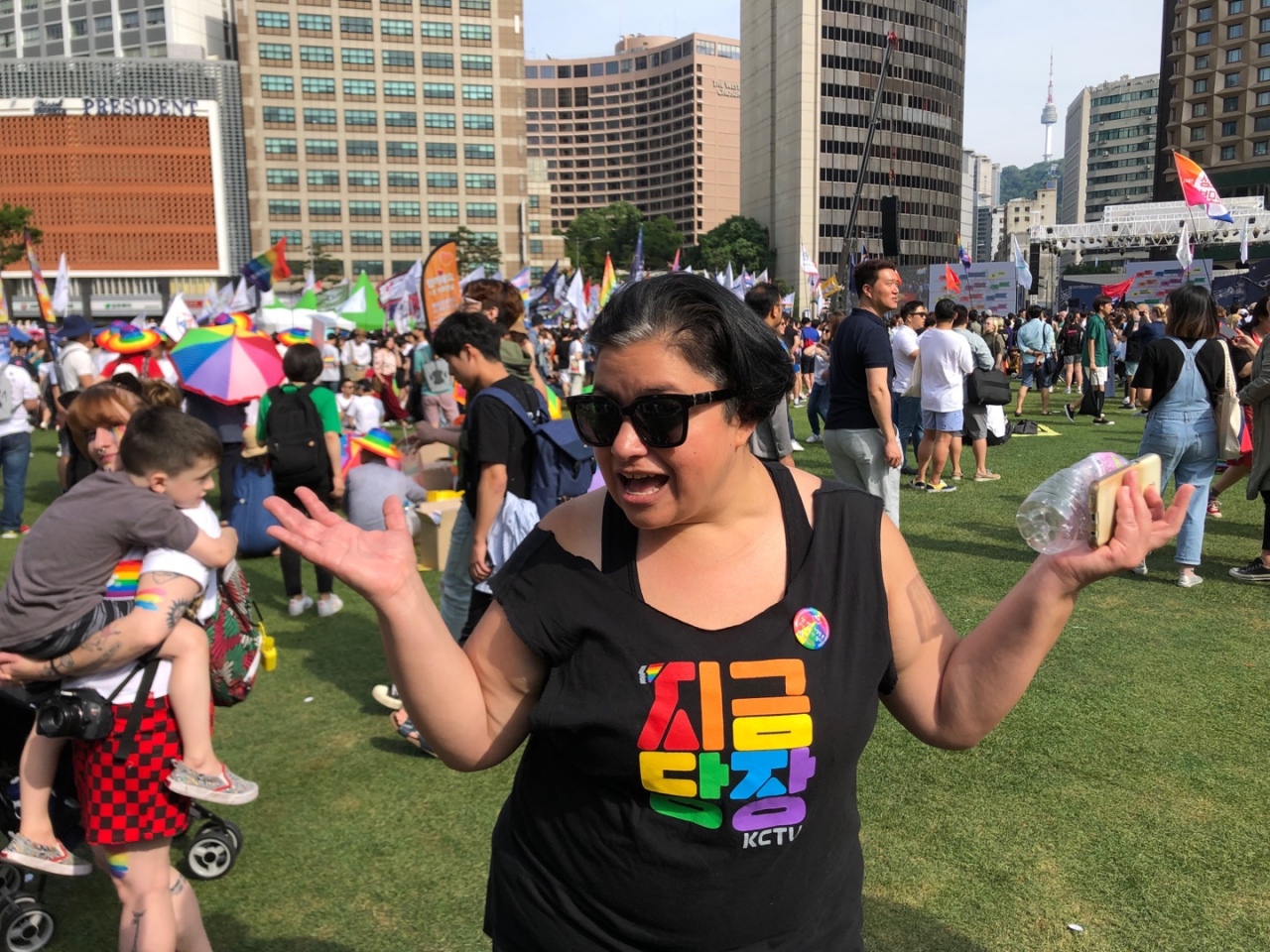 Abigail (Ock Hyun-ju/The Korea Herald)
“I have seen the parade growing huge. I feel good that more people are proud to be who they are,” said Abigail, a 47-year-old American who has lived in Korea for more than 10 years. “I am proud of how Korea has come so far.”

Some 80 booths were set up by human rights organizations, university groups, liberal political parties, global companies such as Google Korea and embassies from 13 countries, including Canada, France and Denmark.

The National Human Rights Commission of Korea, which is working toward anti-discrimination legislation and hopes to see it enacted next year, also joined the event.

The Anglican Church and Jogye Order of Korean Buddhism were among the religious groups that set up booths in support of LGBTQ rights.

“Jesus has not taught us to discriminate against sexual minorities. I came here to show our support for them,” said the Rev. Min Kim Jong-hoon, an Anglican priest. 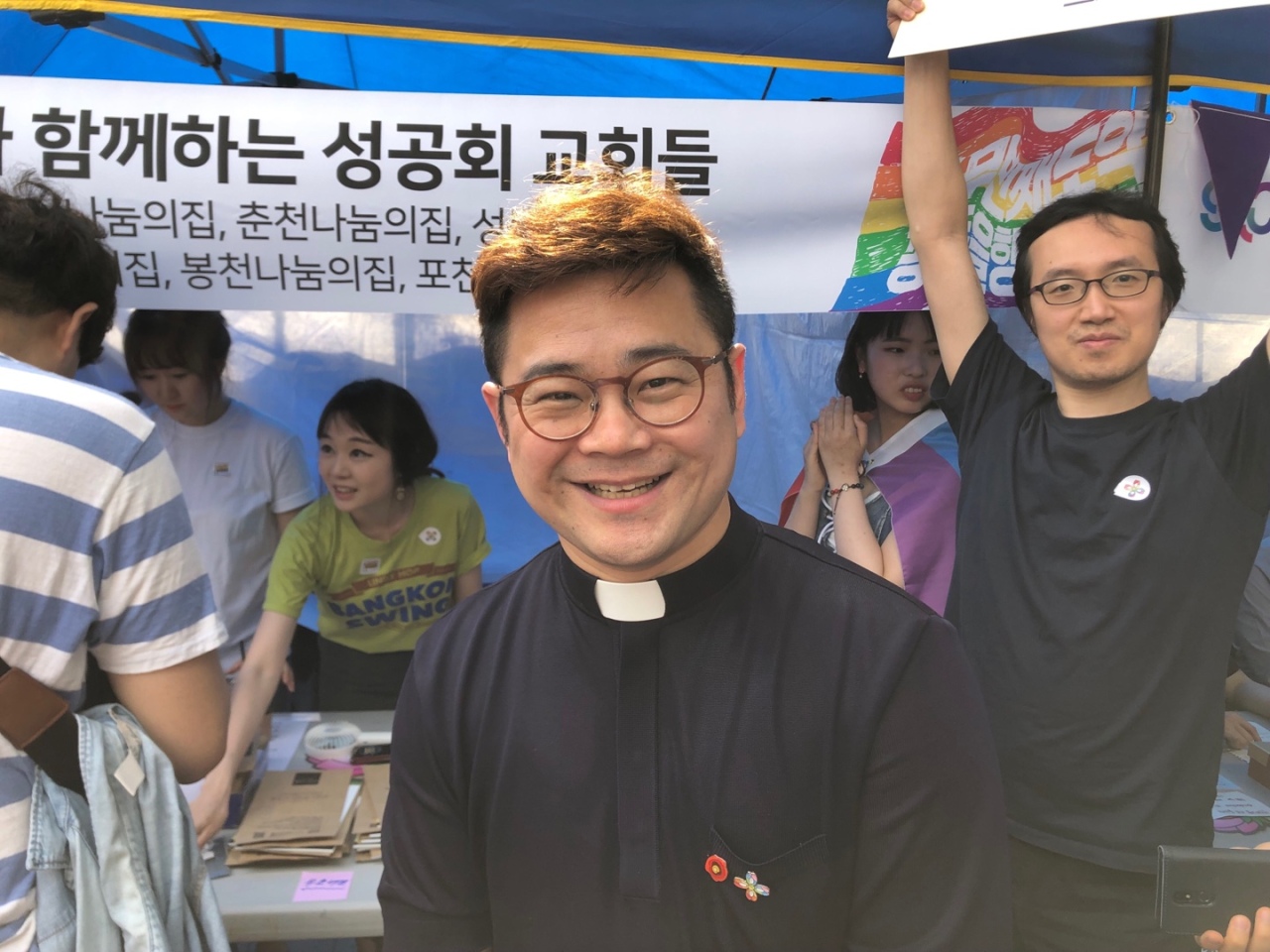 Min Kim Jong-hoon (Ock Hyun-ju/The Korea Herald)
On the other side of the festivities, thousands of anti-LGBTQ campaigners, mostly right-wing and Protestant groups, staged counter protests, called “Love Plus Festival,” near Seoul Plaza. They opposed homosexuality by holding placards reading “homosexuality is sin” or “marriage is a union between a man and woman.”

“I deny homosexuality, especially the festival of immoral acts in public,” said Han Young-dong, 59, who is a retiree and a protestant. 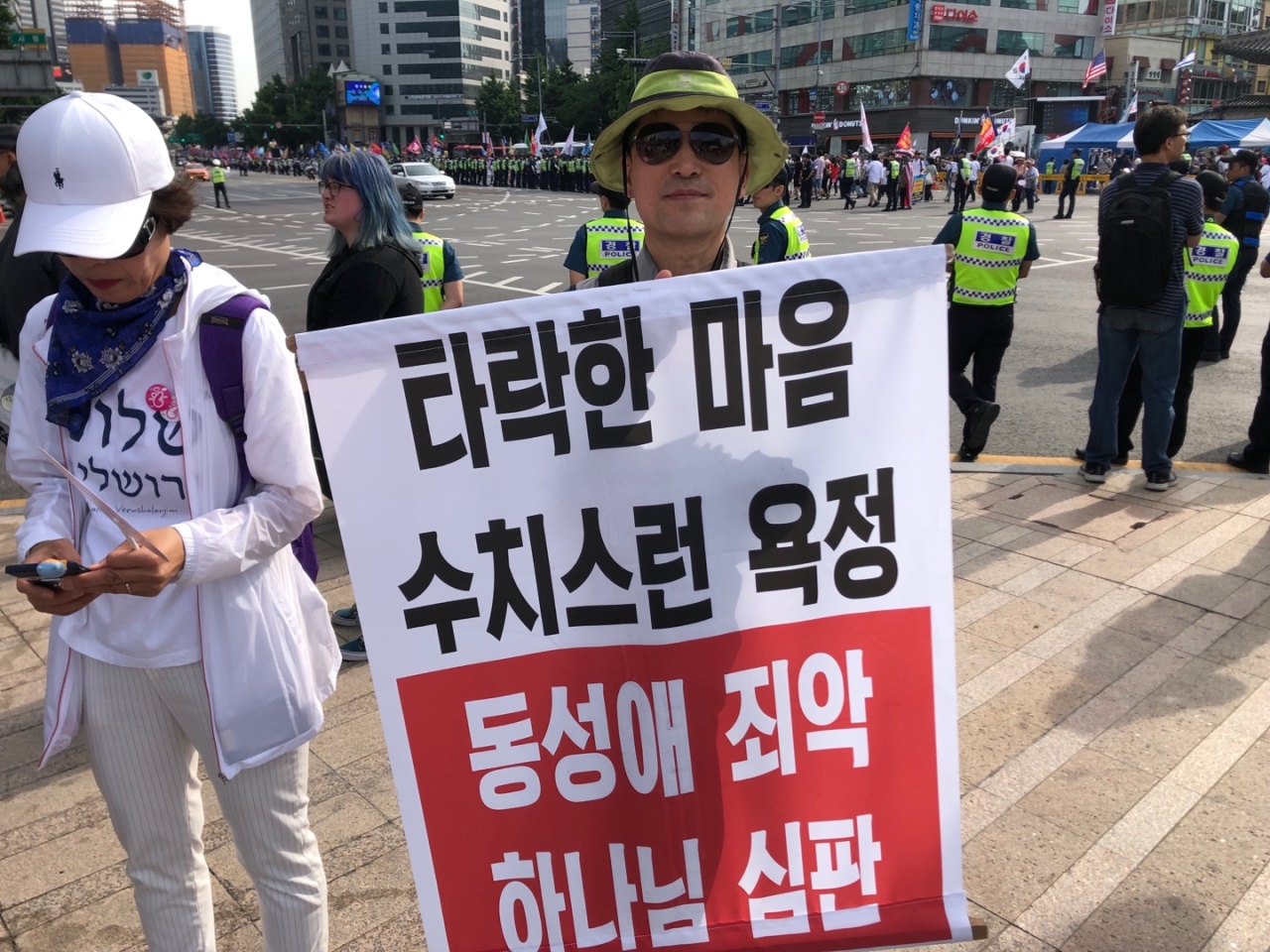 Han Young-dong (Ock Hyun-ju/The Korea Herald)
“Homosexuality is not normal. Men and women should raise children and form families for our country," he said. “I am very saddened by the fact that many young people are participating in the festival, it is such a bad influence." 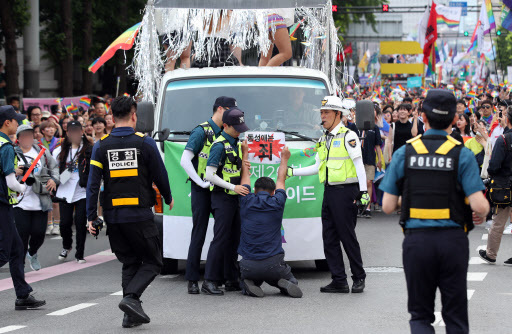 Some 10,000 police officers were stationed around the plaza and along the parade route to separate LGBTQ advocates from their opponents. No major clashes were reported.

“There are many people who are denying the existence of minorities and even using violent language, but Korean society should now respect diversity and live together in coexistence,” Kang Myeong-jin, who headed the organizing committee for the Korea Queer Culture Festival since 2010.

The highlight of the day came as the participants began to 4.5 kilometers march in central Seoul following 11 decorated trucks. They danced to K-pop music blaring from floats, cheering at the performers on the trucks and waving rainbow flags along the way. Many same-sex couples were seen engaging in public displays of affection. 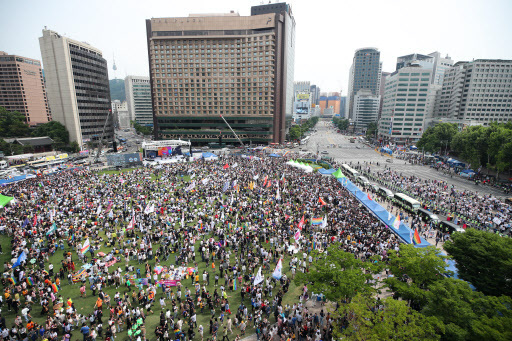 (Yonhap)
“It is the happiest day of the year. I can be the real me here and we can stand in solidarity,” said a 27-year-old woman who gave only her surname, Lee. “I hope more people can participate in this festival to support us.

“I hope same-sex marriage can be legalized here like Taiwan and an anti-discrimination act can be enforced,” said Lee, who has been in a hidden relationship with her girlfriend for two years and has not yet come out to family and friends.

As they marched, curious spectators lined the route, snapping pictures and taking videos.

“I came here to see what it is like. It is not negative at all as anti-gay protesters describe. It was impressive that the participants here were passionately speaking out for themselves,” said a 26-year-old woman who gave only her surname, Min.

Those who were still exploring their sexual identity also attended the festivities.

“I don’t know who I am yet. I am figuring it out. For me, the pride parade is freedom -- freedom to be who we are without caring about what others think of us,” said Ji Yeon-ju, 23, a university student.

“Sexual minorities are not people who need help and sympathy (because of who they are). I just want to be there for them, accepting them as they are,” said Ji, who attended the parade with a lesbian friend.Many of the participants said Korean society is becoming more accepting of sexual minorities compared to the past, but that there was still a long way to go.

“I think the perception of sexual minorities is becoming more positive each year, but I don’t think there is a big change yet,” said Choi Sung-won, 19, who spent his childhood denying his sexuality. He added that he did not feel safe in a Korean society where he is automatically presumed straight.

“The pride parade is the only place where we can show people like us exist in this society.”

The pride parade is part of the Korea Queer Culture Festival that began on May 21. It will run until June 9, with a LGBTQ film festival to be held at Daehan Theater in central Seoul from Wednesday to Sunday.

The pride parade was made possible after a local court ruled in favor of the rally organizer. Earlier, anti-LGBTQ organizations asked the Seoul Administrative Court to ban the parade. The court rejected it on Thursday, citing freedom of speech and assembly.