Don’t take the Gangbyeonbuk highway during rush hours in Seoul.

That was what I screamed in my mind as the bus took the road fare more traveled, an agonizingly slow path eastward, toward Gangwon Province, where the government recently decided to open a new section of the Demilitarized Zone to civilians.

The DMZ Peace Trail in Cheorwon County, Gangwon Province, some 90 kilometers from the capital, is the second of the project located at the inter-Korean border, which the authorities hope will serve as a catalyst for future inter-Korean cooperation. 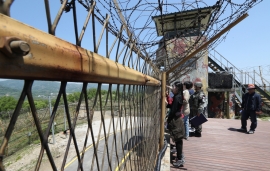 Members of the South Korean press participate in a showcase at the DMZ Peace Trail in Cheorwon County, Gangwon Province. (Joint Press Corp.)

As the bus neared the county, a different traffic problem appeared. The congestion had gone, but the road became way too narrow for the bus. Placards like “We take your dirt” -- whatever that means -- began to pop up in the middle of farmlands and not much else.

We were in God’s country for sure, and what better location could there be for a strip of land that has remained untouched by men since 1953?

The bus carrying reporters pulled over 2 1/2 hours later at a memorial for the Battle of White Horse, which got its name for taking place at Baekma Ridge the name meaning “white horse” in Korean -- in Cheorwon. A makeshift reception desk was all it had at the moment, but the authorities said tourist information boards, including maps, would be installed by the end of the month, and signposts by June 5.

This is where the peace trail begins. It is 15 kilometers long all the way up to the Cheorwon guard post between the Southern Limit Line and the Military Demarcation Line. The former refers to the boundary between the military activities of South and North Korea and the latter is the line 2 kilometers south of that.

The North also has a line 2 kilometers north of the MDL, and what stands between the two Koreas is a buffer zone that is 4kilometers wide in total: the DMZ.

The Battle of White Horse in 1952 was one of the fiercest battles of the Korean War. The memorial has the names of the 844 lives lost on the South Korean side, along with 3,423 stones on its base, for each of the casualties.

The memorial and a hall dedicated to Gen. Kim Jong-oh, the South Korean commander of the battle, had been the extent to which civilians are allowed to set foot without joining a tour.

Although visitors will mostly walk, they will stay in the car for some sections for security reasons.

Visitors will not be required to wear any safety gear, such as body armor and helmets, but safety measures have been taken. Each team consists of 20 tourists on two vans, led by soldiers on a military vehicle. Those who have trouble walking can choose to stay in the car during the walking sections, and the trail is open to visitors aged 10 or above.

According to Maj. Lee Jae-wook, who briefed the journalists, one guide and two others dispatched from the Cheorwon county office will accompany each tour. The latter two have been trained to deal with medical emergencies, and Cheorwon has inked a deal with local fire and police stations to provide aid in case of emergencies.

The first stop of the tour was the Baekma Ridge observatory, which is the closest you can get in the buffer zone. Yeokgokcheon, a stream that got its name from seemingly flowing against the current and back to North Korea, was in clear view, albeit behind the 241-kilometer-long metal fence that marks the border.

Next came a 3.5-kilometer walk with a view of the stream on the right. The sunny day in May was a bit hard to handle, as I could not find shade anywhere.

According to our guide Kim Mi-sook, the military cut down many of the trees along the SLL after a South Korean soldier lost his foot due to a land mine in the DMZ.

“Lush plant life makes it hard to spot suspicious activities, both by eye and heat detectors,” she explained, a cruel reminder that we were in a dormant war zone.

However, the atmosphere was peaceful. For over half a century, precious few had set foot in these lands, and the rich wildlife was a testament to that.
Kim said around 80 percent of the national monuments of South Korea -- which refers to plants, animals, geological formations and nature reserves designated by the government to be preserved -- can be found inside the DMZ.

“Especially in spring, you can find deer or wild boars if you’re lucky,” she said, adding that this is also where around 5,000 red-crowned crane flock.

The Peacock Ridge observatory was as far as we could go on foot. From there, we rode the vans to the gateway across the SLL, into the restricted zone that would take us to Arrowhead Ridge. This was the closest we would get to North Korean territory in the tour, though an MDL observatory is slated to be added to the trail later on.

Somehow the atmosphere changed, as the soldiers accompanying us begin packing extra magazines for their guns and put on body armor. We were asked to present photo IDs and turn in our cellphones, to be returned after the tour.

It was then that I also learned that the military vehicles had body armor and helmets for tourists, to be used in case of emergencies. Maj. Lee said emergencies refer to suspicious movements from the North.

“It we detect any movement from North Korea, the tour is stopped immediately and visitors are evacuated,” he said, adding that this would be when the armor and helmets would be used.

Being a South Korean, I have learned to set aside the fact that we have a hostile country right next to us and to get on with my life. But standing atop Arrowhead Ridge, it was hard to ignore that because I could actually see a North Korean guard post with my own eyes.

From the top of the Cheorwon guard post on the ridge, I could not only see the North Korean posts on mountains, but also the Cheorwon plains and all the way up to Baekma Ridge.

I could imagine why both Koreas, UN and Chinese forces had been vying for this spot, and with a sudden chill, I realized that they had spilled blood, tears and sweat on this very spot.

This is where it happened. That is the tiny window that soldiers peeked out of, wondering when the next assault would occur and if they would live to tell the harrowing tale of what happened.

Downstairs in the bunker were items recovered from the site. These were found when soldiers were working to remove land mines and find bodies of soldiers killed during the Korean War. The excavation is still ongoing and will continue until October, and visitors can actually get a glimpse of it.

The rusty items included a helmet with bullet holes, a battered canteen and a rusty loaded M1 gun, leading us to wonder whatever happened to their unfortunate owners.

It was odd seeing that a place with such a harrowing history could provide such serenity. As I stood next to one of the watchtowers and looked on, I saw nothing but mountains and plant life. Not a trace of civilization in the purest wildlife preservation on the peninsula. At the same time, this was a graveyard and a battlefront.

It was a peculiar experience, one that makes the DMZ truly a unique place.