A man was sentenced to 25 years in jail on Friday for killing a doctor during medical treatment at a general hospital in Seoul last year.

The Seoul Central District Court also ordered the 30-year-old defendant, surnamed Park, to carry an electronic tracking device for 25 years after his release from prison.

Park was convicted of fatally stabbing his psychiatrist, Lim Se-won, while receiving treatment in Lim's clinic office at Kangbuk Samsung Hospital on Dec. 31, 2018. 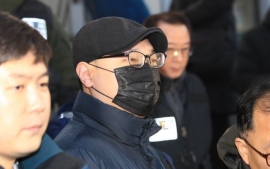 Park stabbed Lim in his chest multiple times but has not clarified his motive. Lim's death raised nationwide awareness about the safety of medical staff at hospitals.

Prosecutors demanded life imprisonment for Park, but the court handed down a jail term, saying the defendant suffered from mental disease and is in need of medical treatment.

"The defendant gravely shocked the bereaved family and the public by cruelly killing his doctor. But the sentence was determined after taking his history of mental disease into consideration," the court said. (Yonhap)