Police said Wednesday that they are set to refer a senior police officer to the prosecution on charges of abuse of power for allegedly pulling strings for Burning Sun, the nightclub owned by former Big Bang member Seungri. 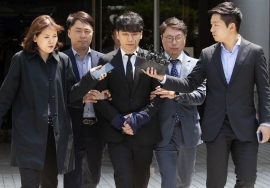 The police, having dispatched some 150 officers for the investigation and targeted some 50 people over the past three months, are facing criticism that they conducted a slipshod probe and protected their own.

Announcing the results of their probe into the embattled club’s alleged corrupt ties with law enforcement officers, the Seoul Metropolitan Police Agency concluded that the former officer, surnamed Yoon, had received favors such as golf sessions and meals from Seungri and Yuri Holdings CEO Yoo In-suk.

But Yoon was not charged, either with bribery or graft, because the favors he received -- four golf sessions, six meals and three concert tickets over the course of two years, worth 2.6 million won ($2.18 million) -- did not reach the threshold that would have been necessary to charge him. Under the Kim Young-ran Act, the limit on such gifts is 1 million won on any one occasion or 3 million won over the course of a year.

Yoon is suspected of being asked to check on the status of an investigation into a bar called Monkey Museum, run by Seungri and Yoo, in 2016 and leaking documents to the two. In return, he is suspected of receiving the favors.

Police also did not charge him with bribery, saying they could not prove that all the favors given to Yoon, the highest-ranking official involved in the scandal, were in return for the documents. They also said the specific timing of the suspected interactions was not clearly established.

Adding fuel to the criticism, on Tuesday a local court refused to issue the arrest warrants the police had sought for Seungri and Yoo, on the grounds that the charges were disputable.

Following the police probe, only one person was arrested in connection with allegations of having helped the nightclub get away with letting in underage customers. Eight others were booked, but without physical detention.

Two former police officers will have their cases sent to the prosecution, alongside Yoon, accused of having behaved as accomplices to abuses of power, according to police. They are suspected of having leaked information on planned crackdowns to Yoon in advance.

Yoon was mentioned several times in an online group chat, where Seungri and others shared secretly taken sex videos and photos of women. He was referred to as the “police chief” who was said to have their backs.

The investigation into Seungri and Yoo is expected to lose momentum to some extent now that they have avoided arrest.

Seungri faces allegations that he purchased sexual services for himself, procured prostitutes for potential investors in his business and siphoned off funds from Burning Sun. Yoo is suspected of arranging prostitution and embezzling company funds.

A high-ranking police officer said he respects the court’s decision and has no plans to file for arrest warrants for either of them again.

The police plan to refer the case to the prosecution before Seungri enlists for mandatory military service next month, he said.