The increasing pace of job creation also slowed further, especially in the retail and manufacturing sectors and among the economically active 30-40 age group.

According to job figures released by Statistics Korea, the total number of jobless people surpassed 1.24 million as of April for the first time since the government started compiling the data in June 1999.

The jobless rate stood at 4.4 percent, up 0.3 percentage point from a year earlier and marking the highest for any April since 2000, when Asia’s fourth-largest economy was reeling under the aftermaths of the Asian Financial Crisis.

The jobless rate for young adults -- those aged between 15 and 29 -- also rose to a record-high 11.5 percent in April, up 0.8 percentage point during the same period. 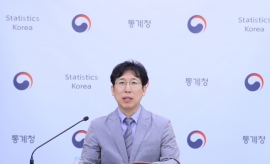 The latest jobless rate was partly attributable to the increased number of applicants to take the civil servant test in cities and provincial authorities. About 380,000 took the test in April this year, while 200,000 had applied in March last year, according to Statistics Korea.

Taking the heaviest blow from the sluggish employment trend was the retail and wholesale sector, which lost 76,000 positions in April. The manufacturing sector, considered the backbone of the country’s export-dependent economy, also shed 52,000 jobs in April, marking a downtrend for 13 consecutive months.

While the typically most economically active 30-40 age group continued to struggle in to find jobs, those aged 60 or more saw 335,000 new jobs in April, most of them as temporary positions.

“In April, there was a mixture of both positive and negative signals concerning the domestic job market,” said an official of the statistics office.

The positive aspects included the slowing pace of job lossses in manufacturing, due to positive developments in the chemical industry, as well as a slight increase of new jobs in the food and lodging sectors, according to the official.

“We will have to keep watch on the manufacturing, construction and retail and wholesale sectors throughout t(the rest of) May in order to figure out the employment situation for the entire second quarter.”