Along the wall are framed drawings of artist Ahn Kyu-chul. The drawing series by Ahn, titled “Man Who Disappeared Into the Box,” comes with text describing how a person can disappear by using the bags presented in the drawings.

Installed in a corner are suitcases made of wood -- identical to the ones shown in Ahn’s drawings. The bags from the drawings have come alive before exhibitgoers. The installation of suitcases are Ahn’s objects used to prove his fiction. Created by Ahn’s works is confusion. Is the bag real? Can I really disappear if I follow the instructions? The audience is left to be baffled by the similitudes the artist created by skirting the line between real and fiction. 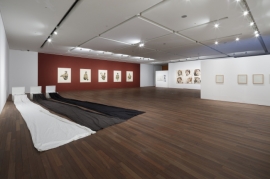 Ahn’s works are part of an ongoing exhibition at Seoul National University’s Museum of Art.

“The museum initiated this exhibition as to comment on the contemporary world in which the boundary between truth and falsity becomes more and more ambiguous,” curator Cho Na-hyun said. “The exhibition introduces artists who uses different forms of lies outrightly for their works.”

Jang is another artist who mixes fictitious elements with tangible materials, blurring the lines between. Jang’s “Preface of Memory: K’s Slides” presents a series of images from discarded slides the artist accidentally came to acquire, as well as various found materials, where she learned about the pictures’ previous owner, whom the artist has named “K.”

With the materials, the artist closely guides visitors, yet the museumgoers at the end come to realize that all the journals and letters accompanying the photo slides have been fabricated by the artist.

Lee Joon-hyung shows how easily truth can be disguised – and thus misunderstood.

In his 2001 work “Dog Project,” Lee shows that his painting comprises his own brush strokes. The lines in blue come along with chunks of paint.

Right next to the painting, however, the artist places several photographs of a puppy walking on the painting to confuse the audience. The chunks of blue paint, then appear like footsteps by puppies, and the authority of the work is dismantled. 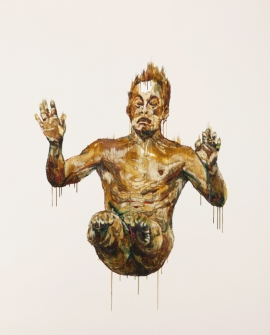 In his painting series “Chapter 11,” Lee has offered portrait paintings. Among them, one painting captures the moment of a professional diver falling in the air. But Lee isolates the athletics on the canvas. On the canvas only the diver is presented in bizarre postures, floating in vacant space.

Shin Jung-kyun plays on how easily visual information can deceive our perception.

At first glance, the work by Shin Jung-kyun appears to be propaganda. But, as you actually read them by words, you realize they are excerpts from the lyrics of boy band EXO’s “Growl.”

Oh Jae-woo and Lee Byung-su add twists to research methodology, which is believed to be truthful.

“Collectors’ Choice,” by Oh, comprises several interviews with fine art collectors of different social and economic backgrounds. In the video, interviewees tell how they have come to purchase specific art pieces that are highly expansive. This seemingly research-based work makes informative observations into the underlying socio-economic backgrounds and circumstances works of art are collected.

This seemingly research-based work is, however, also a fabricated one. The works they possess are plausible replicas of originals that pseudo collectors wanted to buy -- if they could. The contents of the interviews are also made up by the people introduced as collectors. 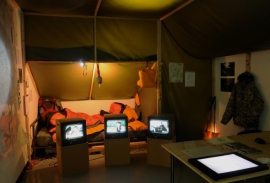 Lee offers a scouting camp-like setup where he introduces his findings from his on-site research. In his “Gwanak Mountain Tiger,” the artist presents his interviews with experts of tiger studies and materials and documents he found in regards to the possibility of tigers living on Gwanaksan, where they are believed to have gone extinct long ago.

The project started with the artist’s “naive” assumption that tigers might still be living in the area, yet ends without the ability to prove it.

However, his research into the subject is still successful in that it has raised questions and challenges areas in which truthfulness has seemingly been solidified -- fields that are no longer questioned. No truth can be taken as granted -- and has to be questioned -- the artist seems to imply.

“My quest was not to make an answer to the question of whether that tigers are still alive or not. I focused more on making a certain setting where I could constantly throw questions,” Lee said.