Koreas slow in enforcing military accord amid focus on Hanoi summit

South and North Korea appear to have struggled to move forward their 2018 military accord aimed at reducing tensions and building trust amid a lack of progress in denuclearization and a focus on a second summit between Washington and Pyongyang, observers said Tuesday.

Since the beginning of this year, the two Koreas have held few talks over the implementation of the accord, in stark contrast to fast progress in the first three months after their defense chiefs signed it in September.

Pyongyang has recently been preoccupied with preparations for the second summit between leader Kim Jong-un and US President Donald Trump, scheduled to take place on Feb. 27-28 in Hanoi, Vietnam.

If the summit produces tangible results, it could help facilitate the implementation of the military agreement and other peace-building measures on the peninsula.

"This year, inter-Korean consultations have rarely been held, though there have been exchanges of documents (about the accord)," a government source said on condition of anonymity.

Until late last year, the two Koreas removed some border guard posts, disarmed the Joint Security Area in the Demilitarized Zone, set up ground, air and maritime buffer zones and carried out demining operations in a DMZ site for a joint excavation of Korean War troop remains. 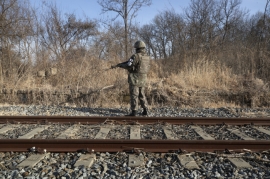 But uncertainty hangs over the next steps.

Seoul and Washington have yet to form a joint military committee tasked with enforcing the accord, as they have not finalized an agreement on how to form and operate the committee.

It also remains unclear whether the two sides can form a joint team to excavate war remains by the end of this month, and begin the retrieval work from April through October as stipulated in the accord.

Allowing the free movement of civilians within the Joint Security Area remains another tough task as the North and the US-led UN Command remain at odds over how to manage the disarmed JSA.

The North wants to exclude the UNC from the JSA management work while the UNC claims its authority to oversee activities inside the DMZ based on the armistice agreement that halted the 1950-53 Korean War.

"The two Koreas have been faithfully implementing the accord and continue to be in consultation," she told a regular press briefing.

"We anticipate that full-fledged efforts to implement the accord will resume after the summit," a military official said on condition of anonymity. (Yonhap)